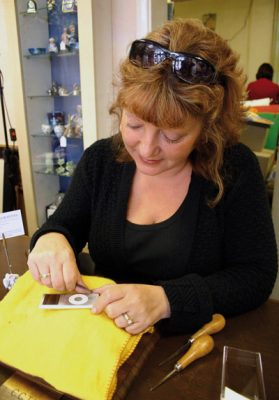 You’re in a rush and you need to get an iPod engraved to send to the Pope! – what do you do?

Ideally you find a Catholic engraver with a large amount of Catholic guilt to unload who will do you a favour, or you find someone like Eileen Gniadkowski of EAG engraving in Birmingham’s prestigious Jewellery Quarter, whose mother would be delighted she was engraving for the pontiff, even if he’s not from Poland!

Said Mike Stanley: “Eileen basically interrupted all the work she was doing, commenting ‘if I don’t do it my mother will never forgive me’.”

She also spoke fondly of how she had been present when Pope John Paul II had visited Coventry in 1982 and the immense impression it had made on her.

The gift is one of three iPods that have been sent out by Boyce & Stanley for the launch of their new album ‘Age to Age’ which features new arrangements of many of the best-loved, classic Catholic hymns that are etched onto the lips and hearts of churchgoers of all ages.

The other iPods have been sent to the Most Revd Vincent Nichols, Archbishop of Birmingham and His Eminence, Cardinal Cormac Murphy-O’Connor of Westminster.