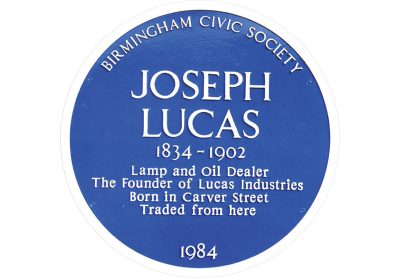 In 1860 Joseph Lucas bought stated his business with a basket skip and a cask of paraffin and set off around the streets selling it. Later in the same year he began selling other items, like buckets and shovels.

By 1872 he moved from his home in Carver Street to King Street and eventually developed the Lucas factory.

A Blue plaque was placed on a building in Carver Street late in 1984, a rather uninspring factory but when it was redeveloped into a slightly more interesting property we all thought the blue plaque would be re-instated, but no, and what’s quite sad is that no-one seems interested in replacing it.

Before – blue plaque over door

After – from almost exactly the same angle.

When he was born, in 1834, the City had a population of barely’ 150,000, much of it living in squalid, over-crowded conditions; drunkenness was rife, roads and sanitation virtually non-existent. When he died in 1902, the City had grown to over half a million, living conditions had vastly improved, and the Chamberlain philosophy of municipal excellence had transformed its physical appearance.

Joseph Lucas’s success as a businessman owed not a little to the success of Birmingham, and it was this great and lasting connection between Lucas and the City which the Civic Society wished to recognise.