Home » Technology and Equipment » Justin Wilson: “I couldn’t live without my Desktop laser” 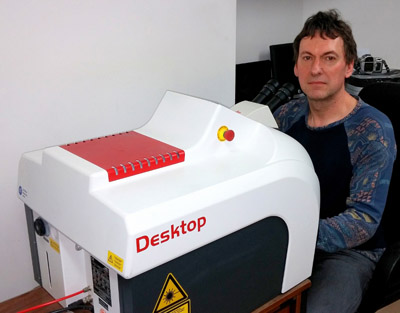 Justin uses the ROFIN Desktop in his workshop.

Justin Wilson started out in the jewellery trade as an apprentice at London jeweller Graff Diamonds in 1974. After gaining experience in all aspects of jewellery repair and manufacture, Justin started out on his own in 1988 with a small unit in Hatton Garden, London.

Manufacturing a range of pieces for customers that range from Bond Street stores to newly graduated students, Justin has grown his business by word of mouth to a very successful and stable level. Seeing the need for fine welding, he initially investigated a micro-TIG solution, which allowed him to extend the range of his capabilities – however around 3 to 4 years later he decided that a laser welder was needed.

Previously Justin had been using the services of Tony Dellow with his suite of ROFIN Desktop laser welders, however he looked around the market before deciding on the ROFIN laser solution. In 2014 he decided it was time to purchase his own laser.

Justin says “I thought about it for a long time before deciding to purchase, I should have done it much earlier”.

Now, after more than 18 months experience in owning his own laser, Justin has found many more uses for the welder than he originally expected, and is happy to recommend it to anyone. “I couldn’t live without it now” quotes Justin, finding that the very fine beam is ideal for some repairs and commissions. “For example,” he says “I can repair very fine chain, making a strong and invisible joint in this 18 ct white gold chain – the chain is made from wire which is only 0.2 mm diameter, this would not be possible any other way.”

Why choose ROFIN?
Justin was impressed by the very clear Leica microscope optics on the ROFIN Desktop Laser, and the training package which was an integral part of the system order allowed him to get started very quickly. Since buying the laser Justin has had no problems with the laser and has not yet needed to call on the after-sales service team at ROFIN.