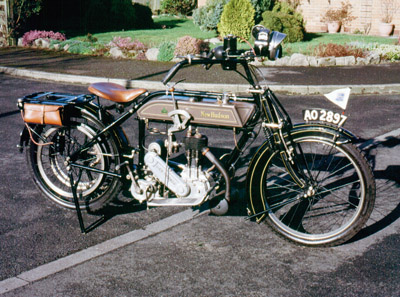 Many of you will be fascinated to share this email we received from Eric Londesbrough. We certainly had no idea that motorcycles were being manufactured on Icknield Street. If anyone else has interesting historical items like this and would like to see them appear within the pages of The Hockley Flyer, please do not hesitate to get in touch with us.

‘Dear Editor,
I have recently received a copy of a page from the Hockley Flyer for October 2009. This page refers to the St Georges works on Icknield street and gives the impression that this factory was used by Swan Kettles from 1900 until its closure. This is quite incorrect as up to 1933 it was used by The New Hudson Motorcycle Company.

This famous company made both bicycles and very high quality motorcycles. A manufacturer who makes 2000 motorcycles a year is a significant company. Over 300 of these machines still exist and are ridden by enthusiasts in many countries of the world.

Your article was brought to my notice by some owners who live in the Birmingham area who were amazed that it should be only known as the Kettle Works. Though they all know that Swan used the premises after New Hudson ceased to make motorcycles in 1933 and set up other factories elsewhere to make Girling brakes for cars, they continued making several thousand bicycles a year.

I have written what is considered to be the definitive history of New Hudson and its motor cycles. In this book called ‘New Hudson – The History of a Motor Cycle Company’ which took me 14 years of research I have photographs and drawings showing the factory inside and out during motorcycle manufacturing days. Much of the information about the Company came from long retired employees of the factory who kindly loaned or donated photographs and documents, and from a collection of the company’s catalogues, letters to agents, employees, and the famous racing riders of the period who successfully competed in many countries. New Hudson over the years held World Speed records for motor cycles.

The founder of the factory was George Patterson, a bicycle maker, who set up under the name of ‘New Hudson’ in Sheepcote Street when he became successful in the early 1890’s. As his company grew and motor cycle making commenced, he moved to St Georges works in Icknield Street.

His two sons worked in the factory and his elder son George junior gained a degree in Engineering at Birmingham and became chief motorcycle designer before World War 1. He anticipated the war and recruited all the younger men of the workforce into a Territorial Army unit.

On declaration of war these men went to France using the company’s lorries and vans as transport. George junior was killed in action and many of his men were killed and wounded. The younger son Harry was seriously wounded and was lame for the rest of his life. All the wounded men were guaranteed a job back in the factory and even the Sergeant Major, who lost both his legs, remained as time-keeper in the factory for the rest of his life.

George Senior was so distressed by the loss of one son and injury of the other that he died soon afterwards at his fine house in Edgbaston. The rest of the family decided to sell the factory to a Mr H. J.Brueton an Alderman and Entrepreneur from Solihull.

The business continued until 1932 but in that year motorcycle sales were so poor due to the recession that their manufacture was discontinued after a greatly contentious meeting of the board with the shareholders.

I have long been aware of Swan Kettles use of the premises after 1932, but I have not previously been aware of the name Bulpitt. It could be that The New Hudson Company did not own the factory only renting it, but this has not been my impression.

I have a fine picture of the works in 1925 with a huge sign New Hudson Motor Cycles on the curved wall at the street corner.

The page from your magazine was sent to me by local New Hudson owners who were concerned at the apparent lack of knowledge about the use of the building. As the acknowledged world authority on New Hudson and its products, (please note I do not consider myself as an expert on anything, I just know rather more it seems than anyone else on this subject), it was suggested I might write to you.
It does seem sad that this building which produced superb machinery and employed such brave men who gave their lives for their country, should only be remembered in Birmingham as a place where kettles were made. Nothing wrong with kettles of course and no doubt many people gained employment making them, but a bit mundane compared with racing motorcycles, and speed records.

We understand the book is out of print but that you can buy a DVD from www.new-hudson.co.uk  or email: