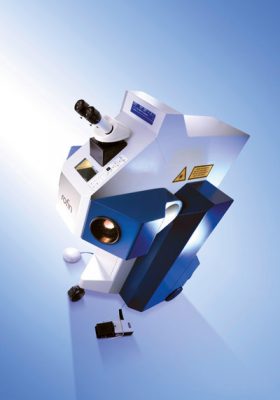 The jewellery industry is renowned as being built upon detailed knowledge of precious metals and gems coupled with intricate manual skills and techniques which have been used for generations.

With such a traditional reputation, the image of the jewellery workshop to those outside of the industry might be considered to be that of a place left behind in the technology race.

In reality however, today’s jewellery workshop is a place where traditional skills and craftsmanship are often enhanced by the latest laser welding technology.

The increasing use of lasers, by an industry perceived to be steeped in tradition, proves that jewellers are actually embracing this technology to the benefit of both their customers and their businesses.

Lasers in the high street:
As with all new technologies and processes when they first emerge, their use is initially somewhat restricted by a combination of cost, technical awareness on the part of the users and in certain cases a reluctance to move away from traditional methods.

Fifteen years ago when Rofin developed the first manual laser spot welder, users were mainly jewellery designers and manufacturers. Today, however, the largest growth area is within the retail sector, with high street jewellers and repair workshops recognising that the laser is an essential tool for jewellery repair. Indeed, operating a laser may soon become a prerequisite to survival in the repair business.

(Laser welding by high street jewellers continues to be a growth area) – Finnies The Jeweller has been in business in Aberdeen for over 50 years and today is one of only a handful of independent family jewellery businesses still operating within the city.

With over 40 staff, the shop has not only doubled in size since 2001, adding new watch and clock showrooms, but also has three jewellers and a watchmaker on the premises. The business has several hundred years of total staff experience in the trade. With such a thriving business Finnies are constantly involved in all types of repairs and adjustments to jewellery and watches. Stewart Dawson of Finnies explains the reasons behind the purchase of their Rofin StarWeld Performance laser.

“You could say that it was fashion led, as increasing numbers of customers were purchasing platinum rings. Every ring needs to be sized, and with our traditional torch based joining methods not appropriate for platinum, we found ourselves sub-contracting ring sizing to a company using a laser”. Stewart continues: “with the sale of 50 to 60 platinum rings each month the sub-contracting costs were becoming prohibitive. Added to this there were the additional costs of packaging and posting not to mention the risks associated with items becoming lost or delayed.”

Prior to purchasing a laser Finnies spent time researching the market and looking at the various laser options available to them. “In the course of our investigations the name Rofin was mentioned time and time again and following a demonstration of the system we decided that the StarWeld Performance was the best choice for Finnies.” In the 2½ years since purchasing their laser it has become an indispensible tool which has transformed the business in a number of ways.

Stewart Dawson added, “The precision of the laser enables us to tackle repairs on a wide range of jewellery without having to first remove and then re-set the gems. We can also effect repairs in difficult to reach areas which would be almost impossible using traditional techniques. If the joint is inaccessible, as long as you can see it, even through a tiny aperture, you can weld it with the laser.

The laser also allows us to offer our customers a one hour turn around on ring sizing, so clients can choose the ring, have it sized and take it home the same day. The overall impact on our business is one of enhancing still further our levels of quality and customer service, a reputation for which Finnies has become renowned over the last 50 years.”

The benefits of having a laser in the jewellery workshop is echoed by many others, including Derby based jewellery designer Michael Hall. “We have been using our Rofin laser for almost 7 years now, and over this time we have honed our skills to take full advantage of the precision offered by the laser, routinely making spot welds with an accuracy of less than 100th of a millimetre.”

Michael goes on to say “The laser has also significantly reduced the time it takes to manufacture or repair jewellery. We often use the laser to tack weld and pre-assemble items. This lets us check the positioning and symmetry prior to final assembly with conventional hard solder. It is often more cost effective and stronger than filling with weld, to add solder to each joint to fill any gaps and quickly pass the torch over these areas to finish the piece in one operation.

This combination of laser pre-assembly and traditional finishing enables us to produce in less than one hour, what used to take a full day. The result for us has been a better quality product offered to the customer at no extra charge but with greater profitability for our business.”

The reliability of the Rofin StarWeld Performance laser has also been recognised by Michael. “In almost 7 years we have only had to have the discharge tube replaced once and other than a minor issue with the water pump, the system has operated faultlessly.”

If the experiences of Stewart Dawson and Michael Hall are anything to go by lasers will continue to play a key role for forward thinking jewellers, operating behind the scenes in an industry keen to embrace the benefits of new technology.