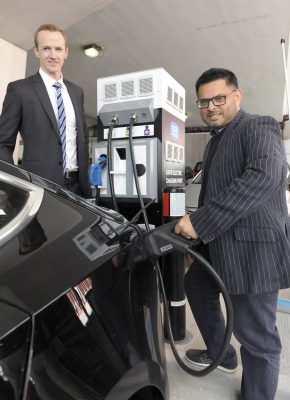 Last year, Birmingham City Council announced that it had secured funding through the Office of Zero Emission Vehicles (OZEV) to roll-out 100% renewable energy electric vehicle charge points across the city.
The site on Navigation Street is the first of 394 fast and rapid charge points that will be rolled out across the city over the next two years by EV infrastructure provider and specialists ESB Energy.
The Council’s Route to Zero Action Plan, published last year, identified electric vehicle charging as a key priority action, with an ambition to have more than 9,000 charge points installed in Birmingham by 2030.
Speaking at the launch of the new hub, Councillor Waseem Zaffar, said: “Delivering a best-in-class electric vehicle charging infrastructure network is a key priority in our Route to Zero Action Plan. It’s a major step in improving air quality in the city and will be key to the electrification of our taxi fleet.

“I’m delighted to have reached this important milestone and look forward to seeing more charge points being installed across Birmingham over the coming months.”
Chargers will be accessible to all, with the initial focus of the programme being on the city’s taxi fleet. ESB Energy is giving EV drivers the chance to try out our first public EV chargers in Birmingham for free for a limited time, using a pay-as-you-go payment plan, before pay for use is launched in the coming months.

This initial network development will allow electric taxis, cars, and vans to get moving quickly, picking up a significant charge in less than 30 minutes (depending on vehicle type).
This will enable the expansion of the current charging network and allow for further investment.

John Byrne, Head of EV Solutions at ESB Energy said: “ESB Energy is delighted to partner with Birmingham City Council to provide a comprehensive public charging network for electric vehicle drivers throughout the city. Having worked with Transport for London and Coventry City Council, we know the huge benefit that EV infrastructure plays in helping build a sustainable future for cities. We look forward to supporting Birmingham and all of its citizens as they transition to low carbon motoring.”

Over the next two years, ESB Energy will install charge points at strategic locations across the entire Birmingham region.

The installation of the network will be on a phased basis over the coming 24 months.