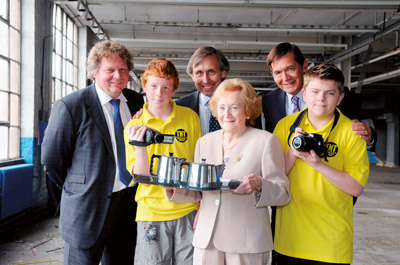 A group of aspiring young journalists and TV reporters are working with Chord Deeley to record progress at its St Georges development in Birmingham’s Jewellery Quarter.

TNT (The News Team) is a group of 9 – 14-year-olds year-olds cub reporters from schools around Ladywood.

They produce regular video programmes about their Ladywood patch for their schools and community. The junior news hounds research the stories, write scripts, film and edit programmes, and then post them on their web site (www.tntnews.co.uk).

A number of the group’s former members have gone on to enjoy careers in the media and acting professions. Among them is Robin Blake, now a news editor at ITN.

TNT was set up and is funded by Birmingham City Council. Its aim is to help youngsters understand what is happening in their neighbourhood, and to help them spread the message to the wider community.

Recent projects include interviewing local World War II veterans, followed by a trip to the beaches at Normandy, and a feature on the Jewellery Quarter’s Key Hill cemetery.

The group is now planning to document progress at St Georges, a scheme set to transform the Jewellery Quarter over the next five years. The £160million mixed-use development is the biggest in the area for 200 years and one of the largest regeneration projects in the city.

Norman Bartlam, housing education officer at Birmingham City Council and manager of TNT, said: “This is a significant project on our patch and it is generating a lot of attention in the local community. As well as its future potential, the site has historical interest so it is great to be involved with it.”

The scheme, called St Georges, will cover a 2.75 acre/6.8 hectare site bounded by Icknield Street, Camden Street and Carver Street, and will include new office space, homes, hotels, shops, a multi-storey car park and a new public square – only the second in the Jewellery Quarter and, at 60m x 50m, equivalent in size to Brindleyplace’s Oozells Square.

Development has been kick-started with the renovation of the Kettleworks, the former Swan kitchenware factory on Northwood Street. The £55million Kettleworks’ conversion will provide 220,000 sq ft/20,438 sq m of BREEAM excellent office space, with single floor plates of up to 50,000 sq ft. An adjacent warehouse will be transformed into the multi-storey car park and will provide 323 spaces for cars, 38 motorcycle slots and 130 bicycle spaces for the Kettleworks.

The ground floor also has consent for retail/leisure use with a large frontage to Icknield Street (A4040 Middle Ring Road), and fronts the new public square.

The Swan kitchenware factory was built by the Bulpitt family, who established the business, and dates back to 1900. The amateur hacks from TNT recently toured the Kettleworks and met up with Iris Bulpitt, who was married to the last member of the Bulpitt family to work at the factory and who worked there herself as a comptometer operator.

Peter Deeley, of Chord Deeley, said: “We have been hugely impressed by the enthusiasm and talent of the youngsters from TNT. It’s great to have them on board to document progress at the development and record it for posterity.”

Chord Deeley has started stripping out the Kettleworks and completion of phase one is anticipated in autumn 2010. On-site clearance works have also begun. Further development of the site, which will include additional office space, hotels and residential accommodation, will be phased over the next 3-5 years.

The Kettleworks is on the market via joint agents DTZ and GBR and is being offered at £15 per sq ft/£161 per sq m.

Editors Note: (TNT (The News Team) gave a recent demonstration at one of the highly successful JQA Breakfasts).