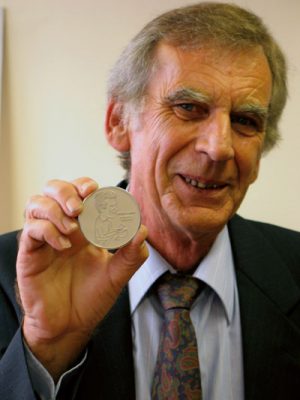 After 41 years of service the senior die sinker at Birmingham’s Toye Kenning & Spencer, Pete Harris, known as ‘The Chief’ by everyone he trained, has retired.

Pete is a craftsman who uses his unique skills to cut by hand the intricate dies that are used to stamp medals and insignia. He has cut thousands of dies during his time with the firm including OBEs and other honours, FA Cup Winners’ medals and other sporting and military medals.

Born in Smethwick, Pete moved to Kidderminster in 1967, when he married his wife Sue and became a committed follower of Kidderminster Harriers.

He began his working life engraving the names of the deceased on coffin plates for a company in Bradford Street. He then worked for several companies in the Jewellery Quarter before joining Toye in 1968.

Recognising his contribution Bryan and Fiona Toye, Chairman and Chief Executive of Toye Kenning & Spencer respectively, presented Pete with a unique silver medal struck by the firm of a caricature of the ‘The Chief’ cutting a die.

Bryan Toye then hosted a lunch for Pete and four former colleagues; collectively they have given almost 200 years of service to the firm.

He has contributed a great deal through the years to the company, using his skills to hand craft to perfection the thousands of dies used to strike medals which are now worn with pride by individuals all over the world and drawing on his expertise and patience to train the apprentices. We wish him every success in his retirement,” concluded Fiona.

“I have enjoyed my time with Toye Kenning & Spencer, and I am proud that my work is treasured by so many people. Passing on the craft to the next generation whilst having its challenges has been rewarding but my wife and I are now looking forward to my retirement,” explained Pete. “I have a number of hobbies that I will now have time to enjoy including my love of golf.”

At the lunch were John Andrews, Dave Andrews, John Coxsey and Ron Jackson. John Andrews worked for many years as a die sinker alongside Pete before his own retirement.

His son Dave was initially trained as a die sinker by Pete but is now the firm’s Police, Fire and Ambulance Sales Executive. John Coxsey used to be a toolmaker at the firm and then left to set up his own business, which is now housed within Toye Kenning & Spencer’s building. Ron Jackson worked in the firm’s stamp shop before setting up Jackson & Froggatt, which has since been purchased by Toye Kenning & Spencer, thereby ensuring the continuity of the workforce’s skills.