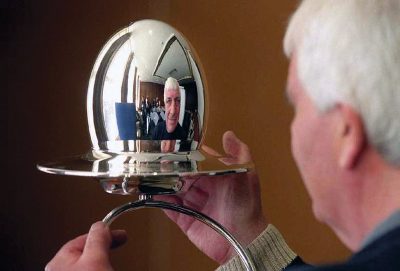 In the August issue of The Hockley Flyer we announced the new ‘Loophole’ Assay Mark which is the guarantee of British Craftsmanship, intended to safeguard British heritage and jobs, and to distinguish precious metal goods made in Britain from those that are imported.

‘Loophole’ was officially launched in November at a Chamber of Commerce reception. Tony McCarthy (Jewellery Quarter Silversmith), the man behind this new hallmark, spoke with Geoff Field (British Jewellers Association) on Radio WM and Saga Radio, as follows:

Geoff: “About four years ago the law in the UK was changed when the hallmark showing the goods were imported was dropped and only the makers’ mark, standard of metal and Assay Office where the goods had been tested was required.”

Tony: “The trade has been devastated by these imports and the silver trade is 40% down, mainly due to the British public being misled by the present hallmarking system which leads them to believe they are buying British goods. Retailers are using the hallmark as a guarantee of British made goods as part of their selling technique.”

When asked what the BJA were doing to protect both the trade and the British public, Geoff replied: “The British Jewellers Association are worried that the Government may in fact be considering even more relaxation of the British hallmarking laws because at the moment Great Britain has the most stringent hallmarking laws in the world.”

Tony: “The Birmingham Jewellery Association was formed in 1887 to protect the interests of the Trade and in 1894 they led a campaign against allowing imports misleading the British public. Now I myself, as a private company, am having to pioneer a hallmark to hopefully protect the trade and the British public.”

Geoff: “With the government’s ruling on non-restriction of imports, etc. there is nothing the BJA can do but to support Tony in his endeavours to bring forward a private hallmarking scheme.”

The four Assay Offices in the UK have agreed under a private initiative to apply this new additional exclusive mark to authenticate precious metal goods made in the UK.