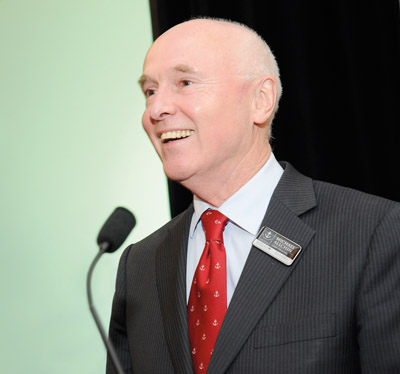 It’s the end of an era for the jewellery industry as Chief Executive and Assay Master of The Birmingham Assay Office, Michael Allchin has announced he will be retiring in Summer 2014.

Despite The Birmingham Assay Office having been in operation for nearly 240 years, Michael is only its twelfth Assay Master and he has stamped his mark very firmly on the organisation.

Fourteen years on this challenge has clearly been delivered. The EU Directive was fought off and eventually ‘retired’ in 2004, and The Birmingham Assay Office now has four additional successful trading divisions, The Laboratory, AnchorCert Gemmological Laboratory, SafeGuard Jewellery and Watch Valuations, and Heritage & Training.

Michael’s relentless energy and positive approach has driven the business forward and his sound understanding of the jewellery industry has been beneficial not only to The Assay Office but to the jewellery community has a whole. Michael has spent his entire career in the jewellery industry and during the past 45 years has travelled most of the world, buying and selling for companies ranging from small private concerns to Signet Group Plc, where he was Buying Director for H. Samuel for fourteen years.

The dangers of loss of consumer confidence in our trade due to malpractice in the supply chain are very real and Michael’s contribution to the Responsible Jewellery Council and CIBJO (The World Jewellery Confederation) has been significant. He has also been concerned about the loss of skill from the industry and has worked with the British Jewellers’ Association and the Goldsmiths’ Company to encourage the re-introduction of apprenticeships, while also supporting the work of the Birmingham School of Jewellery.

Michael leaves The Birmingham Assay Office with his most significant legacy still in progress, the move to a new purpose built building, a project which Michael considers vital to its future. “We all regard ourselves as temporary custodians of this unique institution” says Michael. “The Birmingham Assay Office is only still here because of our great team of people with their innovative thinking and classic Brummie entrepreneurial spirit. The jewellery industry has changed incredibly and unexpectedly over the last ten years, largely due to the drastic increase in precious metal prices. Through the commitment and enthusiasm of the whole team we have successfully retained Hallmarking and delivered four new strands to our business model, developing new niche services for the wider jewellery, watch, precious metal and gemstone industry.

We have literally laid the foundations and created the platform for the next 100 years and it is time for me to move on and let a new Chief Executive and Assay Master bring in a fresh approach and a new burst of energy and enthusiasm to the Assay Office. I feel very privileged to have been in a position to move The Birmingham Assay Office forward into the 21st Century and am grateful for all the support I have received both from my team here and many friends and colleagues in the trade. But I haven’t gone yet. There is a huge amount of work to be done in preparing for the move and running the business in such difficult times. I don’t need to tell anyone I will be giving the next twelve months my very best shot!”