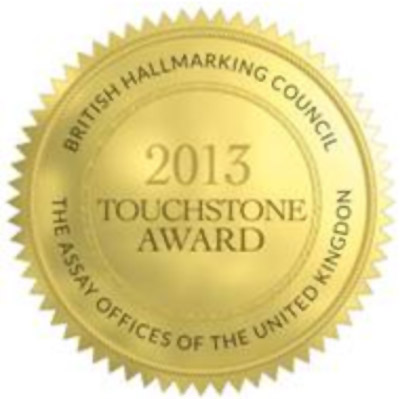 The British Hallmarking Council and the four Assay Offices of the UK are delighted to announce North Ayrshire Council as the winners of the Touchstone Award 2013.

This is the second annual presentation of this prestigious award to acknowledge the excellent work of local authorities in support of hallmarking.

Champion of the Touchstone Award for the British Hallmarking Council, Robert Grice, a long-serving Trading Standards Officer and staunch supporter of hallmarking, considers the award to be richly deserved. “Accolades for Trading Standards departments inevitably focus on prevention of activities which are potentially harmful to health or even life threatening, such as unsafe fireworks and counterfeit alcohol.

However, people ignoring the hallmarking legislation may be defrauding large numbers of the population, many of whom might be vulnerable and dependent on the value of their jewellery as an investment. There can be big money involved and enforcing hallmarking legislation can be very challenging for Trading Standards Officers.” he said.

The Touchstone Awards applications submitted from across the UK this year were of an extremely high calibre.

The joint activities of the Trading Standards Service and the Assay Offices, utilising their individual expertise, was shown to be particularly beneficial. North Ayrshire’s operation revealed consumer malpractice which involved not only non-hallmarking of articles but manufacture of under-carat products.

Like most parts of the UK, North Ayrshire has seen an explosion in the trading of scrap gold in recent years, driven by the high price of gold and the consumer squeeze. Trading Standards set out to monitor the local market place to ensure a fair trading environment for buyers and sellers alike. Their close scrutiny and ‘mystery shopping’ of the market not only ensured it was properly regulated but also, unexpectedly revealed a long established scam involving a local goldsmith who was essentially cheating his customers on a regular basis by returning repairs which were under-carated.

Further investigations prompted 120 complaints against the goldsmith and a prosecution is now in progress; a fitting result for a Trading Standards Team who are clearly very proactive and alert to malpractice.

The Award will be presented to North Ayrshire Trading Standards at the Trading Standards Institute Conference in Brighton on June 18th. British Hallmarking Council Chairman Christopher Jewitt will also recognise the London Borough of Southwark and North Lanarkshire whose entries were Highly Commended by the judges.

North Ayrshire will be the proud custodians of the Touchstone Award for a year and their team will benefit from a free day’s training and an awards lunch at Goldsmiths’ Hall, in the City of London, in November.