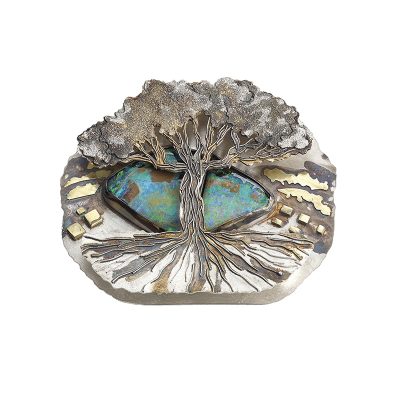 Handmade jewellery has been lost by a major courier resulting in the Birmingham designer, Michele White missing out on exhibiting her creations at Milan Jewellery Week.
“The handmade pieces that I had painstakingly made for the Milan exhibition, never arrived,” reveals Michele. “In fact, they don’t appear to have ever left Birmingham! I handed the parcel over to the DHL courier in my gallery in Caroline Street on September 1.

Although parcels are meant to be tracked to their destination, my parcel, which should have gone from East Midlands airport, never arrived.”

DHL has been approached for comment but has yet to respond.

“DHL have been singularly unhelpful, saying only that they have searched the warehouse and not found my parcel,” says Michele.

“I imagine there may be a few people walking around the city wearing my pieces. If you see any, please let me know!” Michele spent all four days of Milan Jewellery Week in Milan.

“I found it quite enjoyable, and it stimulated all sorts of possible ways to investigate my own work in future. The variety of work was vast with 750 exhibitors, 110 of whom were international. The exhibitions were in a variety of buildings, from sumptuous palaces to little artisan ateliers.”

At the artistar exhibition in the palazzo Bovara handmade gemset pieces with price tags of many thousands of euros sat next to others made of paper, fabric waste, aluminium, eggshells, and numerous other materials.
At the Palazzo dei Guireconsulti there were two exhibitions, one on the ground floor and the other on the first. The ground floor exhibition – The Fab by Artistar jewels, was to represent water, fire, earth, and air as artworks.
There were the most exquisite pieces of fine jewellery the most delicate enamelling and gemset pieces, too. On the first floor was another exhibition called The Jewellery Drops. Jewellery made from precious materials, but also unexpected materials and recycled products. It also included images and videos to help visitors understand the emotional component of the exhibits. Over in the Brera district of Milan was The Hub, 110 businesses from 30 countries, high, fine, fashion and vintage jewellers selling directly to the public.

The Brera district is the Avant Garde area of the city, well away from the grandeur of the duomo and the palazzos. At the same venue was a lecture hall with a variety of talks going on during the show.
On the outskirts of the city is a rather extensive school of jewellery, the scuola Galdus which had an exhibition of the work of students from many countries.

“We were lucky enough to find ourselves in a group being given entry into the school itself,” says Michele.

“We were given a guided tour of a couple of teaching rooms by a lecturer on loan from one of the most prestigious ateliers of the city. Pomellato (named after a favourite horse of the founder) showed us all the equipment and spoke about what the students learn. Standards are very high.

“All over the city ateliers and giftshops and any shop with a connection, however tenuous, to jewellery were taking part. We entered some exquisite places and discussed techniques with designers and makers.”
For this four-day bonanza, makers visited from all over Italy and further afield to display their work, listen to lectures, take part in workshops, mingle with other makers, and hopefully find new places willing to display and sell their work.

“Wouldn’t it be wonderful to have a similar spectacular event in the heart of an area where the industrial revolution, the lunar society and the history of the jewellery industry is so strong?” asks Michele.