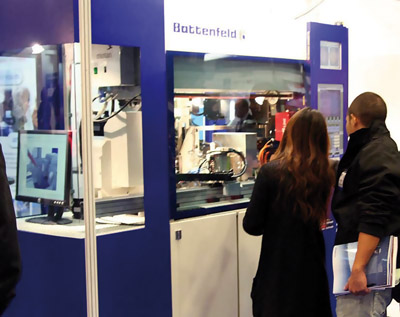 On 31 October 2008 MM Live 2008 opened its doors for the very first time and the enthusiasm and ‘buzz’ on the exhibition floor from both exhibitors and visitors alike was unmistakable.

More than 1000 visitors attended the debut UK Micro Manufacturing show, demonstrating that this exhibition has provided the industry with a much-needed platform to share its products and knowledge with micro manufacturers.

Visitors attended from all over the UK and Europe, even coming from as far a field as Canada, USA, Japan and Israel.

A particular highlight of the show was that for the first time ever in the UK, product designers and manufacturers were able to see a variety of micro manufacturing machines and technologies under one roof.

These machines were seen in action producing precision micro components, giving visitors an opportunity to see live demonstrations of their wide range of capabilities.

The Micro Manufacturing Technology Spectrum – a series of free of charge educational seminars led by some of the leading experts in micro manufacturing – proved extremely popular with each session being full to capacity.

The organiser of MM Live, Rapid News Publications plc., has been inundated with positive feedback providing a solid foundation with which to build upon and develop the show in 2009. Inaugural headline sponsors, Rainford Precision Machines, UK, and SmalTec International, USA, were extremely pleased with the success of the show.

Several companies have already reserved their space for the 2009 show, with many exhibitors increasing their stand size – once again underlining the success of this year’s show and continued support from the industry.

MM Live 2009 will be held 20th-21st October at the Ricoh Arena, Coventry, UK, and is co-located with TCT Live, which is focussed on software and technology for Rapid Product Development and Manufacturing.