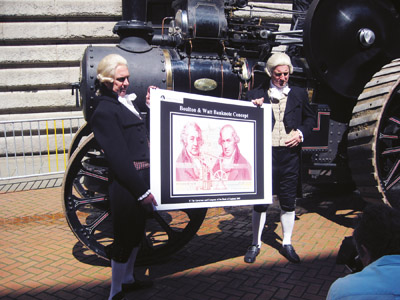 On Saturday 30th May 2009 I had the pleasure of a short discourse with none other than Mr Matthew Boulton, who was accompanied by his business partner and friend Mr James Watt.

They had travelled to meet the good folk of Birmingham, who had assembled a magnificent collection of his artefacts, letters of introduction, drawings, paintings, tokens, coins, buckles, buttons and toys plus of course a display of silver, silver gilt and ormolu wares.

The exhibition which was officially opened on Friday 29th May in the Round Gallery of the Birmingham Museum and Art Gallery by Mr Mervyn King, the Governor of the Bank of England, is displayed in the Gas Hall Gallery.

Mr Boulton was to be honoured on the bicentenary of his death in August 1809, but he seemed remarkably sprightly for a man of such age.

The Lord Mayor of Birmingham, Councillors, Sir Nicholas Goodison and the Head of Museum and Art Gallery, all spoke highly of his contribution to the Industrial Revolution which spread throughout the World.

At the end of his introductory speech to the Exhibition, Mr King unveiled a facsimile of the new £50 banknote, bearing portraits of Mr Boulton and Mr Watt which will enter circulation next year. He made reference to the quantative easing which occurred around the 1800’s when workers were paid in a variety of company tokens. 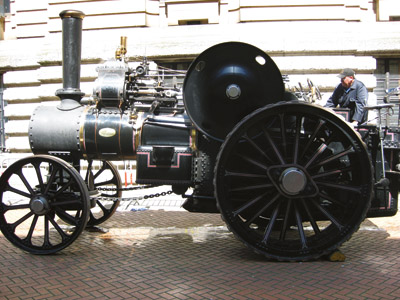 The economy could not cope with the sheer volume of tokens as the Industrial Revolution gathered pace, which led the Bank to award a contract for Boulton to produce coins of the realm.

Between 1797 and 1799 the Soho Mint alone produced circa 45 million half-pennies, pennies and two penny pieces designed by the leading European medallist Kuchler. This was the result of mass production using Boulton & Watt steam engines to drive the coin making machinery.

The  magnificent Exhibition in the Gas Hall Gallery runs until the 27th September, and admission is free.

During the ‘Boulton Day’ the good folk of Birmingham were entertained by a steam traction engine parked outside the entrance to Gas Hall, and many young children enjoyed sitting on the driver’s seat letting off steam from its whistle.

There were demonstrations of 1809 Drill by soldiers from 60th (American) Rifles and 3rd Battalion 95th Rifles in Chamberlain Square.

Anne Boulton ‘Time Traveller’ was to be found storytelling; and ‘Dance like Mr Darcy’ historical dance workshops were given by the Nonsuch History and Dance Company. Elsewhere an instrument maker and musician played popular music from the Georgian era.

There was a Hallmarking workshop and a Family Craft one helping children to create a mini scrap book or page, as a souvenir of a day with Mr Boulton.

I turned to continue my discourse with this famous man and his good friend Mr Watt, but they had vanished. Ah well, perhaps …