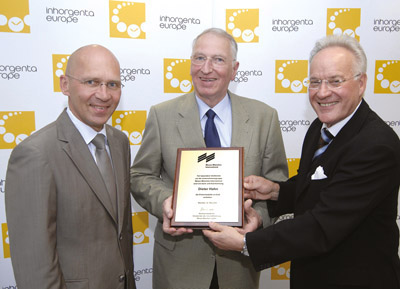 During the last few decades Dieter Hahn, who heads Germany’s oldest diamond cutting company in fourth generation, has always been exceptionally involved in the event and a very attentive partner for inhorgenta europe.

As early as 1974 he began exhibiting his high quality gemstones at the leading trade show for watches, jewellery, gemstones, pearls, and technology in the EU, and has known the event since its beginnings.

He has lent his competence and drive to inhorgenta europe’s advisory board for two decades as a member, and chaired it for the last 10 years. He has been one of the driving forces behind the continuing development of the trade show to keep it in line with the market conditions.

As a founding member of the IDC (International Diamond Council) in 1975 he has had significant influence on the commonly used guidelines for diamond grading.

In addition, for 20 years Dieter Hahn also acted as the president of the Diamond and Gemstone Exchange, has been on the management board of the World Federation of Diamond Bourses (WFDB) for the last 18 years acting as treasurer, as well as chairman of the board of directors of the German Gemstone Museum in Idar-Oberstein, and deputy chairman for the Intergem exposition.

Thanks to his unwavering dedication to the benefit of the industry Dieter Hahn has long since become an institution throughout the gemstone industry. Messe München International is pleased to present this honour to him.