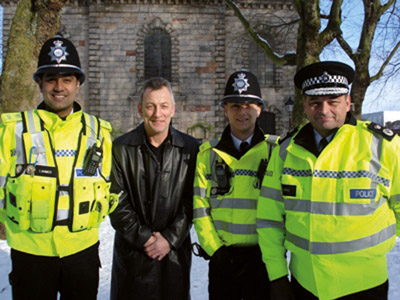 The new Chief Constable of the West Midlands Police, Chris Sims, took to the streets this week to patrol the City’s Jewellery Quarter and get to know the local community.

The Chief’s visit came as part of a number of visits taking place throughout the West Midlands with the aim of finding out first hand what local people think about the policing they receive – and more importantly how it could be improved.

During his visit Mr Sims listened to the concerns and issues of community members as well as reassuring them that front line policing and public satisfaction are top priorities for the future of the service. He also went on to explain that the area’s Police Station, Vyse Street on Warstone Lane, will remain open and available to the public and reassured the community that neighbourhood policing will continue in the area with the same focus on community issues and concerns.

Mr Sims said: “Although I’ve served the West Midlands as an officer earlier in my career, I’m keen to get out and about and get a feel for how communities are developing and learn more about the specific issues they face. I can’t do that by sitting in an office at police headquarters. I want to meet and speak to as many local people as possible, to hear first-hand what policing is like for them and to find out how the service we are delivering is being received.”

The father-of-three, who worked as an Assistant Chief Constable in the West Midlands from 1999 to 2004 followed by three years as Deputy Chief Constable, is determined to build on the good work of his predecessor, Sir Paul Scott-Lee.

He said: “Crime is continuing to fall across the West Midlands, and the vast majority of people we have contact with say they are satisfied with the service they receive. However, I think there is still a lot of work to be done around increasing the public’s trust and confidence in the police.

For example, the quality of contact we have with the public is crucial. We must ensure that every time our officers come into contact with members of the public they offer a total package of care, which follows on long after the initial call for assistance. I want to put the public at the heart of everything we do. If we do that we will win the support of our communities.”

For your more information on your local neighbourhood policing team and policing in your area please visit www.west-midlands.police.uk