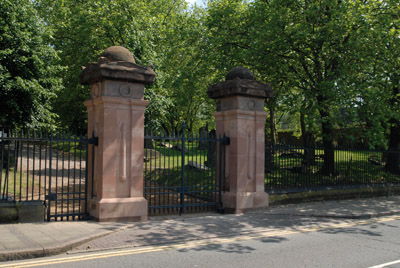 English Heritage announced in November 2009 that Key Hill Cemetery had been upgraded to Grade II* due to its exceptional historic interest.

Key Hill was, initially added to the Register of Parks and Gardens of Special Historic Interest in England at Grade II in February 1996. English Heritage has subsequently undertaken a review of the grading of all 106 cemeteries on the Register and now considers Key Hill worthy of Grade II* status.

The main reasons stated for this upgrading are:

The original planting was carried out by a notable local nursery, John Pope and Sons of Handsworth; some of this planting appears to survive.
The cemetery contains a very good collection of funerary monuments reflecting the social and economic development of Birmingham in the 19th century; it also contains a group of late 19th century pauper or Guinea graves.

The Grade II* status does not entail any additional statutory controls, but it does mean that English Heritage, in addition to the Garden History Society, must be consulted over any planning applications affecting the cemetery.

There are 1600 sites on the Register of which 106 are cemeteries. The Register is divided into three grade bands to give added guidance on their significance. Of the 106 cemeteries on the Register 71 (67%) have been identified as being of a sufficiently high level of interest to merit a national designation and are designated Grade II. A further 24 (23%) are considered to be of exceptional historic interest and are awarded Grade II* status. The top 10% (11) are of international importance and are classified as Grade I.

Key Hill cemetery gates, piers, walls and railings are separately Listed as Grade II on the Statutory List of Buildings of Architectural or Historic Interest, and these gradings remain unchanged.

Further details on the Historic Parks and Gardens Register can be found at: www.english-heritage.org.uk.

I would like to thank Mary Bradley from the Jewellery Quarter Information Centre (she’s a star!) and Brian Southwell of the Friends of Warstone Lane Cemetery for their invaluable assistance in tracing the grave of my brother.
He died in 1936 at the age of 2 months and would have been 18 months older than me. I never knew I had an older brother until I found a memorial card amongst my late father’s effects. The part of the cemetery in which he is buried is very overgrown and there are few memorials. Without the help of Brian and Mary I never would have traced it. The Friends of the Cemetery are doing an excellent job in tidying and clearing the neglected area.
We lived in Spencer Street during the war until we were bombed out in 1940. My father was on fire watch at the time we were bombed. He rushed home covered in white ash to find the row of houses in Spencer Street had been hit and fetched us out. I was three years old at the time. My mother and I were hiding under the stairs. It was lucky that the windows and door in our house had blown outwards not inwards. When we drove up Spencer Street we noticed that it all looks so different now. There were no houses left where we had lived, they have all been replaced by single storey buildings.
Yours sincerely,
Roy Butter.