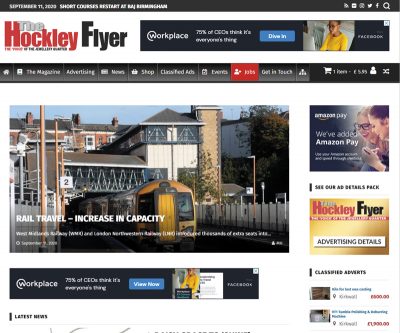 The Hockley Flyer has a brand-new site which is now live but not yet finished. Mark says “There were so many things wrong with the old site, especially the speed, we had to change. Also a few months back a faulty widget on the site caused a mass data dump every few hours bringing our sites to a grinding halt, swamping the server storage space.

I feel that some of the corrupted data is still on the old database slowing it down, plus some other things were conflicting and not working properly

The only alternative was to set up a brand-new database and import everything over. Most of the stuff copied OK without any extra work, except for the news items where the featured image and many images will have to be re-imported manually – plenty of work as there are now nearly 2000 of them.”

The new site occupies a lot less space, uses new technology that sees it offset much of the data not on the actual site but cached in the root folder as well to speed it up as much as three times over a conventional site.

Also, there are some archive years missing, the new site means we can add these, and even re-imagine the older archives with much larger images if we have these in our archives. When we built the first web sites, images had to be as small as possible, around a thumbnail in size as everyone was on dial-up – there was no broadband, and downloads were slow and added hugely to your phone bill!”