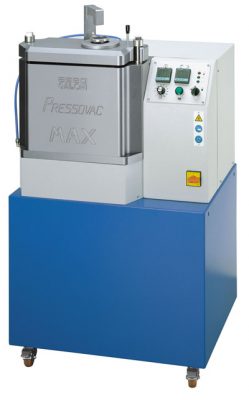 ‘Since the beginning of this year, we have been working with our suppliers on two new important additions to our existing Neutec USA jewellery machinery product range.

One project has been with Galloni of Italy, who have developed a new range of tabletop and floor standing platinum vacuum/pressure casting machines, called Pressovac, and the other has been a completely new range of Studio Plus tabletop and Pulsepoint Plus pedestal laser welding machines from Neutec USA. All these machines are now available with our full service support.

Galloni – Pressovac Platinum Casting Machines
Since December 2010, we have been working exclusively with Galloni, (casting machine manufacturers from Italy), to promote their new range of pressure/vacuum casting machines called ‘Pressovac’.

They have brought out two models, the tabletop Pressovac which has a casting capacity of 180 gms of platinum, and the floor standing Pressovac Max, (with new touch screen feature) which can cast up to 350 gms of platinum.

Both machines will also cast all other alloys such as, gold, silver, brass, bronze alloys, palladium and stainless steel. We have recently sold our 1st Pressovac Max machine in the UK and gained much experience in their use to achieve the highest casting results. The casting results have been very good with high quality yields.

These machines represent the next generation of vacuum/pressure casting machines for casting platinum, which until now has been mostly cast using centrifugal machines of various types. Centrifugal casting has generally been thought as the best way to cast platinum, due to the very short ‘freeze’ time for the metal once it has been cast into a mould.

The high velocity of the centrifugal casting technology, pushes the metal into the mould with great force, quickly, before it freezes. For fine filigree items in particular this has been thought as the best way to cast platinum.

But centrifugal casting has it’s problems, not least of which is the great turbulence that the metal goes through as it is ‘forced’ into the mould via the centrifugal force. Also it is not easy to control the casting temperature, unless operators have a lot of experience.

The Pressovac casting technology has gone way to solving these casting problems, as it is based upon a controlled melting process which gives great consistency to every cast, and the high pressure (3 bar) pouring system ensures the metal is poured quickly into the mould with no turbulence issues.

We have spent the past 6 months perfecting the performance of these machines, and have now set-up a tabletop Pressovac machine for customer trials at our Stoke-on-Trent factory. We will be pleased to show this new technology to any interested companies.

Neutec USA – Studio Plus Tabletop And 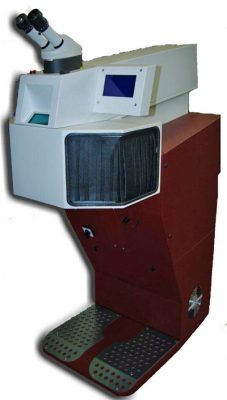 Pulsepoint Plus Pedestal Lasers
During 2011 Neutec USA have designed and perfected a new range of tabletop lasers, called Studio Plus, and pedestal Pulsepoint Plus lasers, upgrading their successful ‘Studio’ and ‘Pulsepoint’ models, which were introduced to the jewellery industry in 2002.

They have added a lot of new features to both machines, and they have increased the number of more powerful variants from each model.

For example the Studio Plus laser now comes in 60, 100 and 125 Joule models, and the Pulsepoint Plus lasers have been upgraded to 110 and 130 Joules.

All these lasers are more than powerful enough to weld silver, which is the most difficult alloy to laser weld. They will also weld all other alloys with ease.

With more models to choose from, customers have an even greater range of options to suit their individual requirements and budgets than before.

Both the Studio Plus and Pulsepoint Plus lasers have easier access for larger pieces, and a larger welding chamber. Both machines, come with a ‘touch screen’ control panel showing all the control parameters of power, time, frequency and dot size, as well as the 5 laser wave forms (which is a new feature on the Studio Plus lasers).

All parameters can be saved for future use, once the operator has set up for a particular job. There is also a new option on the Pulsepoint 110 and 130 Joule lasers for a minimum 0.15 mm dot size.

All lasers are water cooled and can be used all day if required. We are very impressed with these new lasers and we are pleased to be able to supply these new lasers from September onwards.’