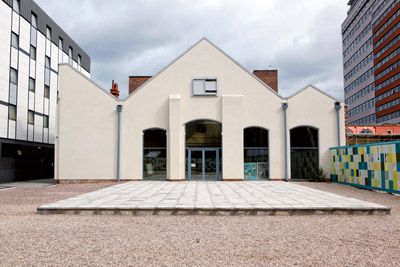 Newhall Square is a mixed-use development compromising offices, a Travelodge, leisure space and a car park, on the site of the former Science Museum.

The site runs along Newhall Street and Charlotte Street, and fronts the canal. The scheme, once complete, will boast a new public square the size of five tennis courts. In the meantime, ROSB has invested £150,000 in the 10,764 sq ft/1,000 sq m temporary public space.

Chris Bond, chief executive officer of ROSB, said: “Although the Newhall Square scheme is still under development, the hotel and office space mean that it is open for business.

We wanted to invite people to visit Newhall Square and experience the public meeting and events space there. Although the temporary square is around a third of the size the proposed public square will eventually be, it gives visitors a flavour of the kind of space we are hoping to create.”

To add interest, hoardings separating the temporary square from undeveloped areas of the site have been ‘wallpapered’. Local artist Kate Farley has designed a collage, called ‘The Order of Things’, based on photographs, rubbings and ephemera salvaged from the former Science Museum.

These are displayed in a grid system, designed to reflect the formal shelving and display systems used at the Museum. The colour palette – muted greens and yellows – is a reference to the paint samples collected on site prior to demolition works.

A photographic exhibition – ‘The Terminal Bar’, a selection of 2,500 photographs taken by Sheldon Nadelman at New York’s notorious Terminal Bar – was recently held in the Engine Room, the refurbished former exhibition hall at the Science Museum, which fronts onto the new square. The black and white portraits depicted the drinking dive’s eclectic patrons, including Irish longshoremen, pimps, drag queens and gays.

ROSB is planning a regular programme of events at the square, which can be accessed from both Newhall Street and Charlotte Street, throughout the year.