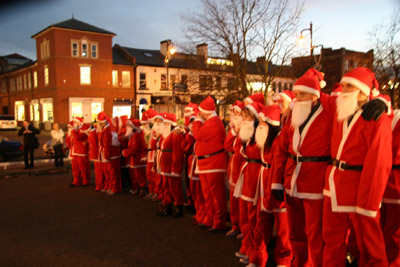 The Christmas period was underpinned by a £35,000 TV campaign covering the period between the 5th and 21st December.

The estimated TV audience for the advertising slots were 2.3 million people. This is part of a wider campaign to raise the awareness of the Quarter.

A Christmas Lights Switch On was organised which attracted publicity in the Evening Mail and involved local schools designing a new Christmas light with a 3-legged Santa Race which raised almost £1,000 for the Children’s Hospital.

Close liaison with West Midlands Travel led to over 30,000 leaflets about the Quarter being distributed through Travel Centres and further publicity on bus and tram plasma screens. The Jewellery Quarter Marketing Fund also ran a competition in ‘Select Magazine’.

Following extensive discussions with the Bull Ring, a deal has been struck to advertise the Jewellery Quarter on their plasma screens with over 70,000 showings over two years using the TV advert as the main material. This also allows six updates during that period for special events such as Valentine’s Day. The Bull Ring attracts around 40 million visitors a year!

A survey of 30 shops in the Jewellery Quarter was undertaken about Christmas trading and almost 50% said that the level of custom was either better or the same as the previous year. This has to be taken in the context of a major national downturn trend in retail approaching 10%.

I hope you will agree that we are making major strides and although we are operating in hard times I think it is absolutely vital that we do not fall behind and we need to ensure that the Jewellery Quarter is on everybody’s radar. This is not just for the benefit of the shops but the more people that visit the area, the more facilities such as restaurants and bars will flourish.