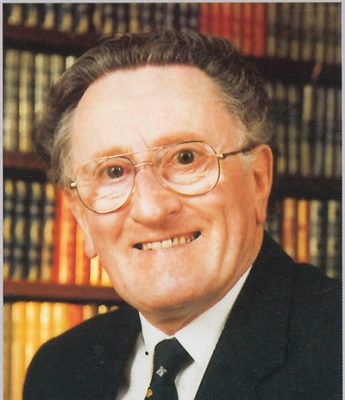 ‘We are very sad to announce the death of Bernard Ward OBE, former Assay Master of the Birmingham Assay Office who passed away on Friday 15th March 2013. Bernard had been ill for some time and now has found peace.

Our thoughts and prayers are with his widow Margaret and his children Val and Michael. Bernard’s funeral took place on Saturday 23rd March at Hutcliffe Wood Crematorium, Sheffield, S8 0HN, at 11.00am

Bernard Ward will be fondly remembered for many, many years to come not only by his colleagues and friends at The Birmingham Assay Office but by the whole of the UK jewellery and precious metals industries.

During his 15 years at the helm of the Birmingham Assay Office, Bernard re-invigorated the business. He encouraged progress through expansion and exemplary customer service, acquired new equipment, and boosted team effort, to position Birmingham as the largest assay office in the UK in just three years.

Today the Birmingham Assay Office enjoys a reputation in the jewellery industry and beyond as leaders in the field of service and technical expertise. A fitting testimony to the ground work laid down by Bernard Ward.

Bernard came from a working class family in Sheffield and though he worked with the most exquisite precious metals for almost 48 years, he was certainly not born with a silver spoon in his mouth.

He lost his father during World War Two and was left in the care of his grandparents when his mother re-married. Shortly after, his grandmother died, leaving a very young Bernard and his grandfather, a steel mill worker, to get along as best they could. “I grew up in very humble circumstances. When my grandmother died my grandfather and I shared the work between us.

It wasn’t something I thought much of, it was just the way things were,” said Bernard at the time. “I passed the test for grammar school, but turned it down. I knew my grandfather couldn’t afford it and to save him the embarrassment I said that I wasn’t interested in going. Since then I have worked really hard to get what I wanted, because I knew that nothing would be handed to me on a plate.”

At 17, he was noticed by the headmaster of his school for his flair in chemistry and physics, and in 1951 his Headmaster facilitated an interview which started Bernard’s career in the precious metals business, working for the Sheffield Smelting Company. He took an immediate interest in the business and started attending night classes to qualify for university where he obtained a degree in metallurgy.

Quite amazingly, he did all this while playing professional football at Sheffield Wednesday and Peterborough United, devoting his wages and spare time to getting his education and preparing for life after the game. How things have changed.

In 1978, 27 years after he had started as a laboratory assistant, he was appointed Managing Director of Sheffield Smelting and Director of Operations, Engelhard Industries in Chessington, with 1,000 people working under him. In 1983, the American mother-company decided to move out of the smelting business and wanted to close down Sheffield Smelting.

Mr Ward convinced them to let him try and sell the business rather than close it down. He did sell it and saved 450 jobs, before moving on to Birmingham and the Assay Office. He said at the time “I’ve always said that business is about people. I’ve been there myself, I can identify with the working people and I just couldn’t face up to seeing all those people made Redundant.”

In 1994 Mr Ward’s eldest daughter died from a brain tumour. It affected the lives of the Ward family deeply, and led to Bernard making a commitment to improving the conditions and rehabilitation of victims of serious illnesses or accidents. Bernard became a trustee and chairman of the fund raising committee at ARCOS, a charity focusing mainly on rehabilitation.

Bernard retired as Assay Master of the Birmingham Assay Office at Christmas 1998. In a very emotional moment he told everyone at the Assay Office that they held a great place in his heart, “my other family” as he described them, and at a big bash thrown in his honour, he was given a standing ovation worthy of a monarch. Bernard said at the time “Looking back at my life, I must say, I have no regrets. There have been bad times, but I have been very fortunate throughout in my working life and in my marriage.”

He was an exceptional man who truly ‘stamped his mark’ on the UK jewellery industry.

In recognition of all of his hard work and achievements and for services to the jewellery industry, Bernard Ward received an OBE at Buckingham Palace on 20th May 1999, the day of his 65th Birthday.

Mr Bernard Ward ‘A Gentleman of the Trade’
Bernard Ward, when he was Assay Master, was one of the first people to realise the potential influence The Hockley Flyer would have on The Jewellery Quarter and how beneficial a Trade to Trade magazine would be to both advertisers and readers.
On the emergence of The Jewellery Quarter around 250 years ago, the area was divided into hundreds of small groups of self-employed skilled craftsman crammed into small (very often semi-derelict) workshops who were ‘fed’ work’ by the larger companies, or brought into the area by ‘factors’ who virtually ‘sold’ the work to the lowest bidder, which kept these hard-working people very poor in their need to be highly competitive. The area was ruled by ‘secrecy’ and very few self-employed people had their name displayed on their door. No-one had any idea of what went on in the area, and many didn’t even care – they were too busy just surviving! Some of these small groups shared corridors with other similar groups in the same building, but didn’t even know their names.
Also, Birmingham City Council appeared to have abandoned the area and by the 1960s the area was overrun with rubbish in the streets, and had almost no street lighting, etc. and many buildings had already collapsed or were in the process of doing so. But things were due to change, thanks very much to The Hockley Flyer and Bernard anticipated this.
We have traced the first Assay Office advertisement to August 1987 (when the magazine was first printed on ‘glossy’ paper) and The Assay Office have continued to advertise to this day and they now keep the area advised of their innovations and activities instead of being somewhat ‘remote’ as in the ‘olden days’.
When I first met Bernard I gave him a copy of The History & Guide to The Jewellery Quarter Issue 1 and he was most impressed. When Issue 1 sold out and I told him about Issue 2 he offered to write a Foreword to the book, which is as follows:

‘I welcome this opportunity to write this Foreword as a tribute to Y.B.A Publications for this second edition of a History and Guide to the Jewellery Quarter.
The last few years have seen important developments in the Jewellery Quarter, so that a new edition of this History and Guide, first published in 1987, is both opportune and welcome.
The opening of the Jewellery Business Centre is one example that typifies the determination to maintain the Quarter as an active manufacturing location, a home for both large and small firms.
These are of course the basis of the Quarter’s very survival, and of its unique and fascinating attraction. The parallel development of the area as a major tourist attraction is seen in the many renovated buildings, the tempting shops, and the opening of the Jewellery Discovery Centre.
Alongside the International Convention Centre and the National Indoor Arena, the Jewellery Quarter is part of the ‘new’ Birmingham. A magnet for visitors is well as a great industrial and commercial city. With plans now being formulated by the Birmingham Polytechnic to establish a National School for Jewellery and Silversmithing in Birmingham which will be a centre of excellence in the teaching of all aspects of Jewellery and Silversmithing including research and consultancy for the Jewellery Trade – the future for the Quarter looks secure.
The Birmingham Assay Office, whose existence is closely bound up with that of the local Jewellery Trade, is proud of its place in the Quarter’s absorbing history, its busy present, and its promising future’.
Signed: Bernard Ward
Thank you Bernard for your encouragement over many years. R.I.P.