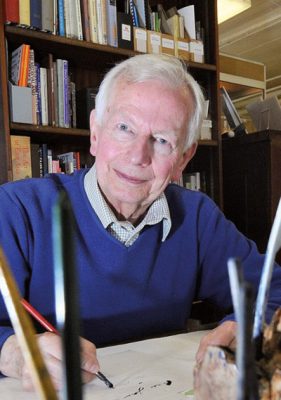 The sudden death of Brian Jones MBE was announced on Friday 31st January 2014.

In 1998 Brian Jones visited The Hockley Flyer offices to tell us about his idea to open a Pen Museum to display the artefacts he had collected over many years and to inform the world of the wonderful heritage of manufacturing pens and pen nibs as part of the story of The Jewellery Quarter, and of course Birmingham, and to set this museum in an original pen/pen nib factory. (The Argent Centre).

We were of course excited about this idea and Brian soon collected many followers and volunteers. The Museum earned Brian an MBE, and has won many awards.

All the information collected by Brian needed recording and he started work on his book, which was finally published in January 2014. Many events were planned to launch the book and when Brian died suddenly just a couple of weeks before these could take place, it was decided to still carry on as a memorial to his wonderful work.

(Brian quoted: ‘I am so pleased to be able, at last, to write and give you the good news that the book is now available. It has been a long process from researching and writing to publication but now we have an excellent result, the journey has been worthwhile’).

Comments Received to date at The Hockley Flyer:

‘I am shocked and deeply saddened by this most unhappy news. I admired Brian as a fellow historian and for his determination, dedication, perseverance and talent; but I also held him as a dear friend, whose friendship I valued. I know how much his loss will be felt by all of you and as his close friends I send you my deepest and heartfelt sympathy. Please pass on my condolences on to Edna and her family.
God Bless Professor Carl Chinn’

‘ It is with great regret that we have to tell you that, after leaving the Pen Museum yesterday evening, Brian Jones collapsed and died unexpectedly.
Our thoughts are with Edna and their family at this time’.
Larry Hanks (Chair)

‘ Brian was one of the nicest blokes that I have ever met and will be a sad loss to the Jewellery Quarter’.
Andy Munro

‘That is sad indeed, I met Brian a couple of times; he was always charming and passionate about the Pen Room, which will be the poorer without him. He will no doubt be welcome as a scribe ‘upstairs’.
Ross Bellamy

Message from Peter Rice:
As promised, the details of funeral arrangements for Brian Jones.
This will be on Wednesday 26th February 2014.
A private, family- only cremation will take place to be followed by a Service of Thanksgiving at Chester Road Baptist Church, Chester Road, Erdington at 12.30pm, followed by refreshments in the Church Hall.