Home » People » All Change at the Birmingham Assay Office 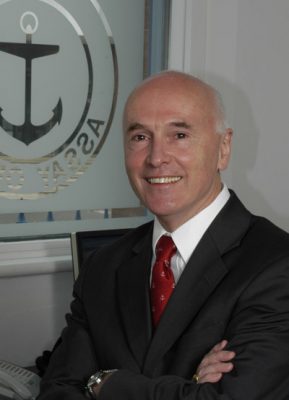 It’s the end of one era and the beginning of another for the Birmingham Assay Office and the jewellery industry as Chief Executive and Assay Master Michael Allchin retires after 15 years and Stella Layton steps into the role.

Michael has spent his entire career in the jewellery industry and has travelled most of the world, buying and selling for companies ranging from small private concerns to Signet Group Plc. e  joined the Birmingham Assay Office in 1998 when it seemed likely that EU harmonisation would eradicate the UK’s rigorous independent statutory hallmarking, His brief was to fight the EU Directive and drive diversification to ensure the business could survive without statutory hallmarking.

This challenge has clearly been delivered. The EU Directive was eventually ‘retired’ in 2004, and The Birmingham Assay Office now has four additional successful trading divisions, The Laboratory, AnchorCert Gemmological Laboratory, SafeGuard Jewellery and Watch Valuations, and Heritage & Training.

Michael’s relentless energy and positive approach has driven the business forward and his sound understanding of the jewellery industry has been beneficial not only to The Assay Office but to the jewellery community has a whole.

His contribution to the Responsible Jewellery Council and CIBJO (The World Jewellery Confederation) has been significant. 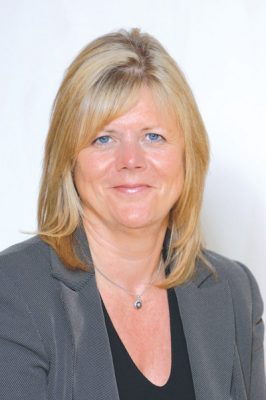 He has worked with the British Jewellers’ Association and the Goldsmiths’ Company to encourage the re-introduction of apprenticeships and is supportive of the Birmingham School of Jewellery.

“I feel very privileged to have been in a position to move The Birmingham Assay Office forward into the 21st Century. We have created the platform for the next 100 years and it is time for me to move on and let a new Chief Executive and Assay Master bring in a fresh approach and a new burst of energy and enthusiasm to the Assay Office.” 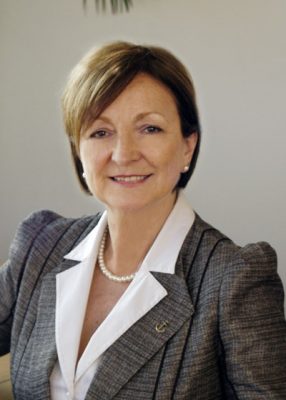 That new burst of energy has arrived in the form of Stella Layton, incoming Chief Executive & Assay Master for The Birmingham Assay Office, who has been in post since January 2014.

Only  the 13th Assay Master in 240 years, Stella will be the first female Assay Master in the UK. She joins a strong, mainly female team headed by Chairman Kate Hartigan, (although Technical Director Dippal Manchanda represents the boys admirably!)

Stella is well known in the precious metal industry, where she was Global Divisional Director for Cookson Precious Metals until their recent takeover by Heimerle & Meule.

She has worked in precious metals for 28 years and brings a wealth of relevant knowledge and experience to The Birmingham Assay Office. She is no stranger to the Office as Cooksons have been a customer for decades and Stella herself has been a Guardian since 2007. She is also a Liveryman of the Goldsmiths Company.

Stella has also applied her management skills outside the precious metals industry, having served as a non-executive director of the Birmingham Women’s Hospital Foundation Trust, and also the Birmingham & Solihull Mental Health Trust. 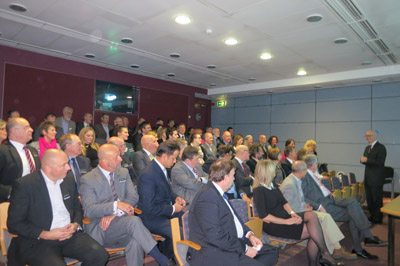 Presentation in lecture theatre the great and the good Annual Hallmarking Review 2014.

Stella joins The Assay Office at a significant time when, in addition to attracting an increasing number of hallmarking customers, the Office is driving growth through diversification.

The Birmingham Assay Office is already a respected, well equipped centre of independent expert opinion for all issues relating to jewellery, gemstones, precious metals and an increasing amount of consumer product safety testing such as nickel, lead and cadmium in fashion accessories.

The  move to a new purpose built facility in the Jewellery Quarter will bring new opportunities for the business.

Stella has the potential to really make her mark as she builds on the foundations laid by Michael and his team and applies her strategic and management skills to take the Birmingham Assay Office through its next stage of development.

Stella says, “The Birmingham Assay Office is a unique institution with an unusual mix of heritage, tradition, state of the art kit and innovation. Driving its growth whilst balancing all  is an exciting challenge which I am really looking forward to.  I have had a great welcome and have been very encouraged by the enthusiasm, commitment and obvious pride of all of the staff. There are great opportunities to be developed.  As the Assay Office team say: “Bring it on’.” 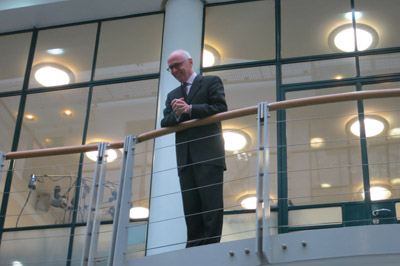 Farewell Drinks for Michael
There will be an informal gathering at The Jam House from 5pm until 8pm on Friday 21st March for friends and colleagues to come and say goodbye to Michael before he retires on April 4th. Everyone is welcome so please do drop by and say hello and goodbye!

About The Birmingham Assay Office
Now the largest Assay Office in the UK, this not-for-profit organisation has been a centre of expert opinion and independent assessment of jewellery and precious metals for nearly 250 years.

The organisation takes pride in its high level of service and the use of the latest technology by all its commercial divisions, from Hallmarking, Diamond and Gemstone Certification, Jewellery, Watch and Silverware Valuations through to precious and non precious metal testing, product safety and quality assurance testing as well as educational training and consultancy.