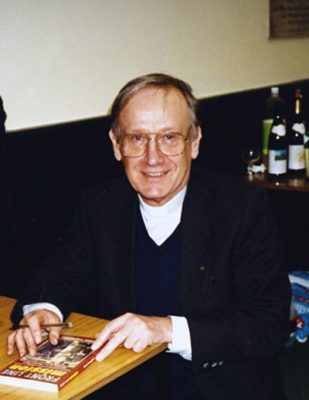 Denis passed away on 24th January 2013 at his home in Ross-on-Wye. He suffered a stroke a few years ago and never fully recovered.

Denis found his vocation whilst serving his two years National Service. “I valued the work that the padres did during the war and I have tried to exercise that same pastoral care and concern for people.”

Denis was ordained in 1958 and began his industrial career in 1961 whilst a part-time industrial chaplain in Croydon.

After being involved with Croydon and Coventry and missions abroad, Denis was appointed Vicar at St. Paul’s in the Jewellery Quarter (from 1985 to 1998) which gave him a very good way of being part of the institutional church.

“I think it has to be said that industrial mission as a national organisation made an enormous contribution to encouraging and supporting and thinking clearly about the whole unemployment issue.”

How did Denis come to St. Paul’s?

“Canon Ralph Stevens was Vicar at St. Paul’s for nearly forty years and greatly loved, but when he left his successor, an able man, was given a bit of a rough time by his parishioners. They missed Ralph! He left after only two years – so it was I who was appointed Vicar. I always maintained an ongoing relationship between industrial mission and the institutions of church life.”

“During my term as Vicar of St Paul’s I made an effort to increase the size of the congregation, with some success! We were fortunate in having a splendid 18th Century church building with a fine ‘painted window’ and a good acoustic, set in a beautiful Georgian Square. During the era of heavy industrial activity around the church, the church itself had become covered in black grime and it was great when we had the opportunity to have it cleaned.”

“We built up strong links with the Birmingham Conservatoire and local industries, in particular the Jewellery Trade. We were known as ‘The Jewellers Church’ with a history stretching back to James Watt, Matthew Boulton (both of whom occupied pews in the church, and other members of the historic Lunar Society.”
“I was invited to become Chaplain to the Birmingham Assay Office and the British Jewellers Association, later becoming Almoner and Vice-Chairman of the BJA Benevolent Society. I also took a keen interest in the Jewellery Quarter Association and was invited to become its Chairman.” 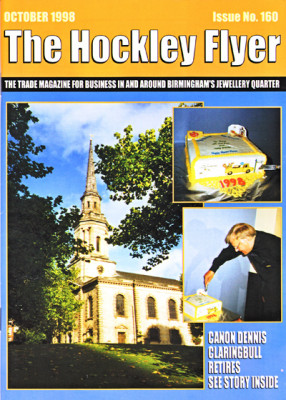 Denis was on the front cover when he retired

“Before I left Birmingham the City Council decided to encourage the Jewellery Quarter to become an ‘Urban Village’ as industries began to close and industrial premises began to be converted to City Centre dwellings. However the noise of ‘drop forging’ etc cannot easily co-exist with residential life so there were problems to be solved!”

“I have always been a ‘steam’ enthusiast and I really enjoyed being Vicar of a Church associated with James Watt and Matthew Boulton. I developed an annual ‘Steam Festival’ and organised (profitable) model railway exhibitions in church to coincide with the Traction Engine Rallies organised by the nearby Museum of Science and Industry.

Indeed, I could really boast that I had the entire City of Birmingham within my parish – referring of course to the Stanier Pacific locomotive of that name which at that time resided in the nearby Birmingham Museum of Science and Industry.”

In 1997 Birmingham City Council, without warning or explanation, cancelled that year’s traction rally and all future such events and, of course, the Council also decided to close the Museum of Science & Industry itself. It was a sad day for The Jewellery Quarter, and in particular Denis, when the locomotive ‘City of Birmingham’ was brought out of the museum and loaded onto a low loader and removed from The Jewellery Quarter forever!

To Denis unemployment was always an issue. and he worked in close co-operation with Manpower Services and training workshops were set up including a sales training school to teach people to sell – not products – but to sell themselves for a job. They then proceeded to establish the Birmingham Managing Agency, its task to manage church sponsored projects throughout Birmingham. Denis helped organise and took part in the ‘People’s March for Jobs’.

Denis organised Industrial Festival days and Exhibitions within the church and he was seen daily on his ’rounds’ visiting commercial and industrial premises in the Jewellery Quarter. In times of trouble Denis was always first on the scene with spiritual and practical support. On Jewellery Quarter Festival days stalls were set up inside and outside the church with Punch & Judy shows, clowns, jugglers, and Morris Dancers. His Breakfasts in the church were highly popular and became quite crowded at times! Even in retirement to Ross-on-Wye, Denis was still organising conferences etc., and continued to do so until he suffered a stroke a few years ago.

This is just a quick insight into Denis’ life – it would take a whole book to include everything he achieved.

One of Denis’ last quotes was:

“As for the future, I hesitate to make any predictions! The escalation of change is so fast these days that my knowledge of Chaos Theory prompts me not to speculate as to what the future might look like. Nothing is predictable. All I would say is that it’s going to move very much faster.

I hope that industrial mission will stick with it and will hang on and hold tight as the whirlwind gathers! And I know that we shall remember the basic theology: Our Lord goes on ahead of us!”