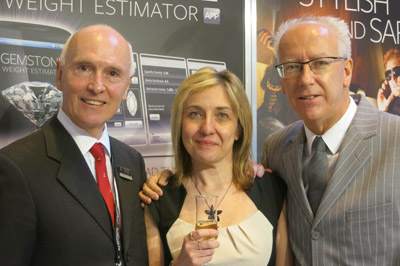 Fifty miles of gruelling cycling in the wind and the rain was rewarded when Michael Allchin, Chief Executive of The Birmingham Assay Office, received the inaugural “Fundraiser of the Year Award” from Cyclists Fighting Cancer. Louise Johnson, one of the founder members of the Charity presented Michael with the Award on Sunday 3rd February at The Jewellery Show, NEC, Birmingham, an appropriate venue as so much of the £16,000 raised was a result of the generosity of the jewellery trade.

Willie Hamilton, Chief Executive of the Company of Master Jewellers who introduced Louise had helped to swell the total raised by auctioning his services for a day and encouraging members attending CMJ’s Annual Conference to support Michael’s effort.

Cyclists Fighting Cancer also acknowledged Marion Wilson, Sales, and Marketing Director of The Birmingham Assay Office who assisted Michael with his fundraising, although not the cycling! 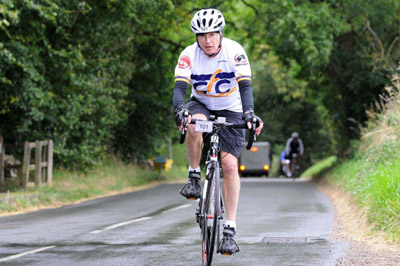 The £16,000 that Michael’s heroic 50 mile cycling sportive through the very cold, wet, and windy Cotswolds in September raised has already made a significant improvement to the lives of 57 children with cancer, and their families. The money funded 45 bikes, 6 trikes, 5 KMX Karts, and one tandem and made Michael the most successful individual fundraiser for Cyclists Fighting Cancer in 2012.

Michael says of the award “The Sportive was a huge challenge for me. I go running regularly but am new to cycling… I have still only cycled 700 miles in the last twelve months and 50 of them were in the sportive.

This award acknowledges what is best about our industry. The support, encouragement, and overwhelming generosity has been tremendous and the outcome makes it all worthwhile, although I still never want to be so cold, wet, and exhausted again.

Thank you to all those who contributed. Between you all you have enriched the lives of nearly 60 very sick children and given their families a new positive focus at a very difficult time.”