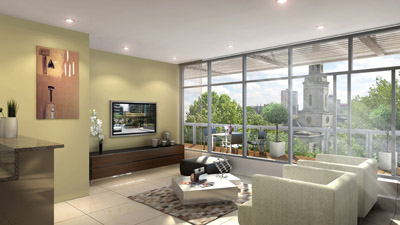 All four penthouses at Chord Developments’ St Paul’s Place scheme have been snapped up within days of their launch, achieving record values for Birmingham’s Jewellery Quarter.

In an unusual move for a developer, Chord released the penthouses at the same time as it launched the scheme in April. The top floor apartments were sold off-plan, with one buyer bagging two.

Chord director Geoff Shuttleworth said: “Developers generally keep back penthouses to sell as part of the final phase, preferring not to sell them off-plan; but there was such a demand for the penthouses at St Paul’s that we decided to release them at the start of the sales campaign.

We have been rewarded with immediate sales at a time when many penthouses around the city are languishing on the market. It says a lot for the location of St Paul’s Place.”

There are a further 164 apartments available at St Paul’s Place, including a range of studios and one and two-bed apartments. The marketing suite is at 14 St Paul’s Square, where interested purchasers can browse a model of the development and floor plans, and view the options for the Porcelanosa-designed and fitted bathrooms and contemporary modular kitchens. Prices on the remaining apartments range from £150,000-£260,000.

The 0.77 hectare/1.9 acre site will be the biggest residential development in the historic Square. Fronting the eighteenth century St Paul’s Church, the site is bounded by Northwood Street, Caroline Street and James Street. Pedestrian access will be off St Paul’s Square, with vehicular access from two aspects. There is parking for 146 cars.

The scheme was designed by Chord’s in-house team and will combine the character of a period building set in an historic Square, with cutting-edge architecture and interior design.

A £2million marble clad entrance lobby is based on the reception area of a trendy boutique hotel, while a landscaped communal courtyard at the heart of the development features sleek modern glass and a state-of-the-art lighting scheme.