Home » Entertainment » Ping It, Ring It, Roll It, Write It 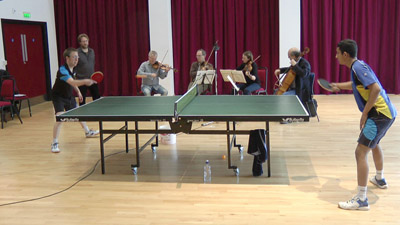 Exciting new musical commissions inspired by the heroic quest, William Blake, bell ringing, table tennis and the spirit of the Olympic Games. Birmingham Conservatoire presents a day of musical fun and games on Sunday 6 May 2012 in the city’s historic Jewellery Quarter.

The event, part of the UK-wide PRS For Music Foundation’s New Music 20×12 programme and inspired by the spirit of the Olympic Games, includes the world premiere of The Voyage, a 12 minute opera from composer Michael Wolters and theatre company Stan’s Cafe.

Using the Olympic theme, the story follows a mythological character leaving home to face challenges overseas, in the hope of returning a hero. One of the performance’s most striking features is the mobile nature of the audience. Mounted on castors, a custom-made seating bank is designed to roll spectators 20 metres from the action before bringing them back home.

The Voyage, a playful two-act opera for a voice, a double bass and eight recorders, is the second collaboration between Michael Wolters, Deputy Head of Composition at Birmingham Conservatoire, and Stan’s Cafe, whose radical theatre productions have been acclaimed around the world.
Also airing throughout the day are three other imaginative and inspiring New Music 20×12 works, each just 12 minutes in length.

Ping! is a collaboration between composer and Birmingham Conservatoire Head of Composition Joe Cutler, Coull Quartet and Fusion Table Tennis Club, which explores the distinct sounds and rhythms of a game of table tennis. Recently premiered at Warwick Arts Centre, the piece creates intricate cross-rhythms between table tennis players and the string quartet, with film by international visual artist Tom Dale.

Composer and Birmingham Conservatoire Composition Tutor Howard Skempton’s Five Rings Triples is an Olympian twist on the English bell ringing tradition – a heady combination of music, sport-like skill and maths for the world’s heaviest instruments! Coventry Diocesan Guild of Bellringers will be ringing the piece throughout the day from nearby St Paul’s Church where attendees can visit the bell tower, and find out more about the art of bell ringing.

Finally, fellow Birmingham Conservatoire Composition Tutor Richard Causton introduces a film and discusses the inspiration behind his yet-to-be-performed new piece Twenty-Seven Heavens. Written for a large 120-piece orchestra, it is inspired by William Blake’s famed verse, Jerusalem, and areas of London, including the main Olympic site.

Performances take place at regular intervals throughout the day alongside a variety of other activities, including workshops, talks, face painting, wii games and video screenings. With an on-site cafe also open, visitors are invited to stay for as long as they like, and sample the rolling programme.

David Saint, Acting Principal, Birmingham Conservatoire, said: “The New Music 20×12 commissions were hotly contested and we are proud that four of the 20 have been won by our staff. This event will be a great adventure for the whole family and will prove that contemporary music can be enjoyed by anyone. I’m very much looking forward to it.”

Vanessa Reed, Executive Director of PRS For Music Foundation, said: “We are delighted that so many talented music creators and organisations were inspired to apply to New Music 20×12, a fantastic initiative that will see the UK’s music community leaving its legacy as part of the London 2012 Cultural Olympiad.

The chosen collaborations offer a snapshot of the UK’s fantastically rich and varied new music scene and we are proud to support their contribution to this unique, international celebration.”

About Stan’s Cafe and @AE Harris
Stan’s Cafe is a group of artists from a variety of disciplines, though primarily theatre practitioners, working under the artistic direction of James Yarker. The company consists of a core of long-term collaborators and a range of associated artists.

Their original and often radical theatre productions are in demand around the world. @AE Harris is a performance venue and rehearsal space in the heart of Birmingham’s Jewellery Quarter, close to the city centre. It was set up by Stan’s Cafe to host projects, which, for reasons of scale, expense, messiness or outrageous oddness could find no other home in the city. More information: www.stanscafe.co.uk