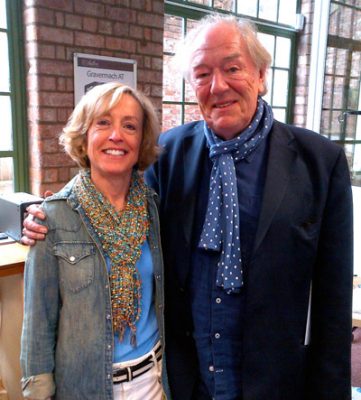 Sutton Tools’ MD Maggie Nichols was spellbound when leading actor Sir Michael Gambon strolled into the Sutton’s showroom, asking for a demonstration of the latest PUK4 welder (which he subsequently bought).

Sir Michael is best known for his eighties television role as Dennis Potter’s Singing Detective, Phillip Marlow, and more recently as Dumbledore, the headmaster of Hogwarts School in the Harry Potter movies. He also played King George V in ‘The Kings Speech’.

Despite a lifetime in the theatre, as a teenager Sir Michael served an apprenticeship in toolmaking and retains a passion for repairing antique guns and clocks, which is where his interest in the PUK4 welder came in.

Although designed for goldsmiths, the PUK4 welder has a growing following in antique restoration work due to its ability to rebuild worn parts by adding metal without using solder, rather than trying to machine replicas of them.

In its latest version the PUK4 now has touch screen controls, which offer the user preset ranges for the most common metals and welding situations, making setup a breeze. For the more experienced user an expert menu is available allowing the user to select not only the welding power and arc duration, but also to tailor the high frequency impulse range to any given situation.

With the PUK4 you can weld on findings and charms with no cleaning up, add metal, weld adjacent to heat sensitive stones, weld silver alloys, fill porosity, tack components prior to soldering, weld seams, and much more.

The PUK4 also has an optional earring post welder attachment, which enables welding of posts to earring backs in one instant resistance weld triggered by a foot pedal. For a demonstration of the PUK4 call Sutton Tools on 0121 236 7139.