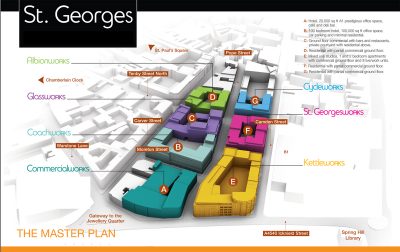 Developer Chord Deeley has been given the green light to commence a £160 million mixed-use scheme in the Jewellery Quarter.

City planners gave the thumbs up to the scheme, called St Georges, which is set to create a vibrant new living and working quarter with 700 new homes, offices, two hotels – the first in the Jewellery Quarter – a new multi-storey car park and retail and leisure space. More than 750 jobs will be created on the site.

The scheme is one of the biggest regeneration sites in Birmingham. The 2.75 hectare/6.8 acre site, bounded by Icknield Street, Camden Street and Carver Street and incorporating Pope Street and Moreton Street, will create a prominent new gateway at the Icknield Street entrance to the Jewellery Quarter.

A £15million Ramada Encore hotel is to be built on the corner of Icknield Street and Pope Street. The proposed boutique-style budget hotel will include 151 bedrooms. A second budget hotel, comprising 100 bedrooms, is also planned for the site. Chord Deeley has selected the Alfred McAlpine/New World Leisure joint venture to develop and operate the hotels.

The masterplan for the scheme has been designed by Urban Initiatives, the leading urban planning and design practice appointed last year to advise Birmingham City Council on the development of the city centre masterplan. There will be an emphasis on high quality public realm, ensuring that St Georges is as much a visitor destination as a place to live and work.

Many of the buildings on the site are derelict or in a poor state of repair. None of the buildings are listed, though Chord Deeley has opted to retain the Kettleworks building – the former Swan kitchenware factory – which dates back to 1890.

Peter Deeley at Chord Deeley said: “Much of the Jewellery Quarter has been sadly neglected. Many jobs have disappeared as the area’s manufacturing industry has declined and investment in the built environment has come to a halt. St Georges will breathe new life into this overlooked part of the city.”

“At present the site is slightly isolated from the remainder of the Jewellery Quarter, despite its frontage onto Icknield Street and the outer ring road. Our plans will integrate it with the rest of the area by improving both pedestrian and vehicular access and improving connectivity to the rest of the Jewellery Quarter and Birmingham city centre, at the same time as preserving the historic street patterns.”

It is anticipated that building work will start on site this summer. The first phase incorporates the plot fronting Icknield Street and will accommodate the Ramada Encore hotel, 2,453 sq m/26,600 sq ft of offices, plus 320 sq m/8,800 sq ft of retail space and a 237 space multi-storey car park. The site will be completed by 2012.

The St Georges scheme is the first development by Chord Deeley. Jewellery Quarter specialists Chord, based in St Paul’s Square, has more than £75million of development underway or in the pipeline in the area. Deeley Properties, part of the award-winning Deeley Group headquartered in Coventry, is a leading national developer with current projects in Coventry, Southampton, Oxfordshire, Buckingham and Bristol.