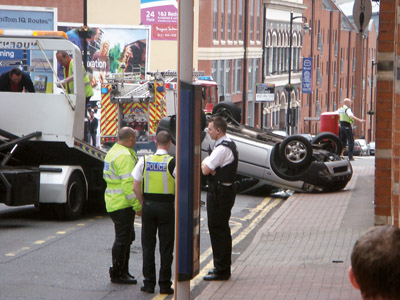 There has been yet another change at Vyse Street Station. Sergeant Steve Parkes has been appointed and Inspector Spanner has replaced Inspector Hines.

The police reported at the recent Community Safety Steering Group that there had been a reduction in recorded crime in the area in relation to burglaries of dwellings and vehicle crime in particular. Vehicle crimes still tended to relate to the theft of visible items such as satnavs etc.

It was also agreed that a single non-emergency telephone number should be made available to all businesses in the area. (07847 811523). The idea behind this is to save the hassle involved with dialling Steelhouse Lane and always being given the run-around!)

Marie asked if something could be done to make the junctions of Graham Street/Frederick Street and Frederick Street/Albion Street safer due to two major accidents in the space of three weeks.

CCTV:
The four new CCTV cameras have been fully operational since Wednesday 25th June. The two old cameras have been removed and the 42 new signs will be put up around the Quarter and the old ones removed in the near future. Discussions are now being held to establish a location for a fifth camera to cover Newhall Street and part of the canal.

Special KIN message
WM Police have received intelligence that jewellery shops in Southampton have been targeted by two males who have distracted staff in order to steal a £13,000 diamond ring. These males are described as speaking with broken English and are possibly Hispanic (No further descriptions of the males or item stolen). There is no suggestion that they are in the West Midlands area but Neighbourhood Team 22 would like to ask all jewellers to be vigilant and to report any suspicious activity to them at Vyse Street Police Station. (Tel No. as above).