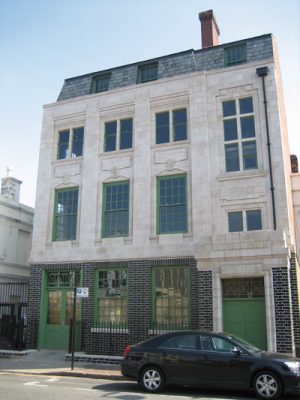 It has taken a long time to get this far and has only been achieved through patient and constant negotiations between the building’s owner and the City Council’s Conservation Department (especially Richard Hudson).

There is still a lot of work to be done to the inside and rear of the building but what has been done so far has certainly enhanced the area near to the Chamberlain Clock.

‘Brown Shed’ Building – It was good to see the ‘brown shed’ removed from the front of the building in Frederick Street. Scaffolding has gone up and work has commenced on site. Restoration of this Grade 2 listed building will not be an easy task due to the poor condition of the fabric of the building.

(Incidentally, the ‘brown shed’ and the extension on the front of the building corner Regent Street/Frederick Street were added to the buildings to house the massive amount of war work carried out in the Jewellery Quarter during the Second World War. Both buildings were supposed to be ‘temporary’, to be removed when the war ended.

The ‘Clissold’ Building – Dave Keay is experiencing difficulties with refurbishment of this building due to the railway tunnel running underneath which restricts the depth of the pile-driving needed to support this fragile building. 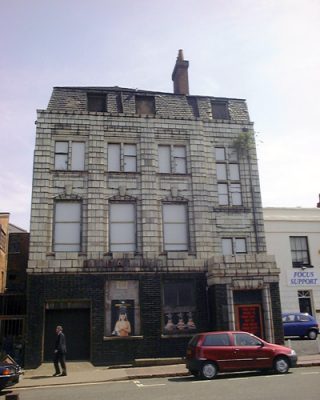 Health Centre – Warstone Lane – No news at the moment on this site.

Tenby Street North – Site has been flattened but no sign of building work commencing.

61 Caroline Street – Framework now erected – this building will at least screen the side of the Heritage Court flats!

Hall Street – Work in progress. (Note: The 61 Caroline Street and the Hall Street developments have led to many on-street parking spaces being lost temporarily (if not permanently!) Under the new proposed scheme, these would have been Permit Bays. If you had paid for Permits to park in Permit bays – just think how frustrated you would be to find there are not enough permit bays available!)

Tesco’s/JRS News – Good that the difficulties have now been resolved. The Tesco staff are extremely helpful but it is frustrating to be forced to buy pre-packed vegetables in large quantities. Most of the apartments in the Quarter are ‘single’ occupancy and a lot of fresh food could be thrown away! The Jewellery Quarter is not a ‘family’ area and Tesco should perhaps think again on this point.

The shoppers car park on the front is causing some concern especially in the evenings and at the weekends due to people, including children, running amongst moving cars and congestion being caused by cars entering and leaving the car park. Some Tesco shoppers are also parking in front of the other shops and often coming very close to the shop windows.

Number of Flats in Quarter – We are in the process of obtaining figures of how many flats are either built, in process of being built, with planning permission but not yet started, and including the number of flats in the process of seeking planning permission. It will be very interesting to review this number as, according to the ‘Urban Village’ plan it was supposed to be around 2,000 flats, bringing in 5,000 residents!

Feridax have told me that when they relocated to Halesowen they ceased as a manufacturing company as became a ditributer to the whole motorcycle dealer network. I had hoped to find some someone had taken over and continued with manufacture but from the tone of the article here it would appear not!
My interest lies in scooter windscreens with a whirling rain wiper, as exists on a ships bridge windscreen and manufactured by Feridax in thr 50/60’s for a number of scooter makes. do you know of any of these hidden away anywhere or of any lead you might give me to locate one.
Kind Regards
Tom