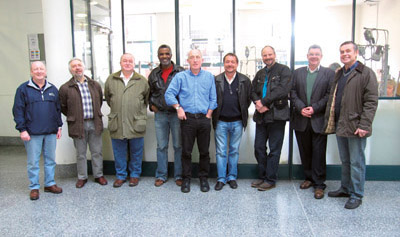 On the 2nd of March 2010 a group of past students who attended the Jewellery School in the early seventies arranged a reunion to see the facilities that are currently available at the college.

The tour of the school was conducted by Gemmology Course Director Kate Hopley who showed the group around the building and pointed out that the courses available included jewellery, silversmithing, horology and gemmology.

Head of School Professor Jack Cunningham took time out from his busy schedule to meet with the group and he explained how modern production technology played a major part in preparing the students for life in the competitive jewellery industry.

Deputy Head of School, Terry Hunt re-acquainted himself with the reunion members, having taught them during his first year at the school back in 1971.

All the people in the photograph run companies operating in the jewellery sector although Jeff Andrews, who flew in from Johannesburg for the event, recently retired as production director from his company called South African Manufacturing Jewellers.

All the visitors commented on the changes to the school, not just the physical appearance, the school looked very different in 1971 when it was a rabbit warren of small rooms and narrow curling staircases, but also the changes in the equipment and technology available to the students today.

After visiting the school a long lunch was enjoyed by all at the Pasta Di Piazza on St. Paul’s Square. All the visitors promised not to leave it another 36 years before getting together again.