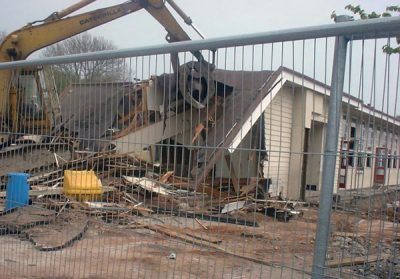 History is like a ‘wheel’ and what goes around comes around. This has been especially true with the Jewellery Quarter.

The families living in the slums of Hockley in the early 1930’s were re-housed in Great Barr and the children attended Beeches Road School. Now, eighty years later, Perry Beeches II School has set up a ‘free’ school in The Jewellery Quarter, where they have taken over Tame House in Newhall Street, (previously the headquarters of Severn Trent Water).

I was born in 1929 in a back-to-back slum house, the façade of which can still be seen at No.10 Tenby Street (Grade 2 Listed), where it has now been absorbed into a commercial development.

Despite 1929 being the year of ‘The Depression’ when people were dying of starvation, disease and the cold, and TB and rickets were rife, the City Fathers (Birmingham Corporation – now of course Birmingham City Council) in their ultimate wisdom decided that everyone had the right to fresh air with a bit of space around them, and inside sanitation.

For this purpose an estate of semi-detached houses was built in Great Barr a few miles from Hockley, which at that time seemed to be in the heart of the countryside. These were not council houses but owned by private landlords, but were still ‘affordable’.

My family was given a certain amount of priority because I had been diagnosed with TB and arrangements had to be made for my father, a local policeman, to move from Kenyon Street to Perry Barr police station.

I can still remember the excitement when we moved (around 1935) of having a proper bath and an inside toilet with hot water on tap and a large garden. The house was in Dyas Avenue where the houses were only built to halfway down the hill. The Towers and the Co-op were there and they were just building The Clifton cinema. The only school was Beeches Road School which was a row of wooden huts separated into Infant, Junior, and Senior.

Because of the sudden influx of children from Hockley into Great Barr, it became imperative to expand Beeches Road School and a new Infant, Junior and Senior school were soon under construction.

By the time War was declared In 1939 my family had moved into a slightly larger house in Yateley Avenue at a cost of a few shillings more per week.

On completion, one of the new Beeches Road school buildings was allocated as an A.R.P. (Air Raid Precautions) post – therefore the Senior School was moved to the newly constructed Aldridge Road School (from where they were evacuated in 1940, to avoid the bombings).

The school was quite a long walk from the other side of Walsall Road, and despite better living conditions, money was still short and children often had to make a choice of spending a halfpenny on a bus ride or spend that halfpenny on a bottle of school milk – (no free milk or dinners, family/maternity allowances, social security or family credits in those days).

Because of War shortages, you couldn’t spend money on fruit (none at all in the shops) or sweets (you needed coupons and parents allocated these). Now, some 80 years later, Perry Beeches School is reversing the events of the 1030’s and moving into The Jewellery Quarter (Hockley).

I spent a lovely couple of hours in the new school this month and in early October I will be talking to two classes of 11 year olds, telling them about how The Jewellery Quarter is a fascinating area with almost every room, in every building, in every street, having a history of its own. We have the busiest Assay Office in the world, the finest Jewellery School in Europe, three award winning Museums (Museum of The Jewellery Quarter, The Pen Room, The Evans Silver Museum, plus Soho House, with the Coffin Works on the way, and of course Soho House), a ‘Jewellers’ Church set in the only Georgian Square left in Birmingham and with famous people like Joseph Chamberlain, James Watt, Matthew Boulton and Baskerville all having lived and worked here – what more can you ask for?

We also of course have several art galleries and I have already introduced the Head teacher to The Assay Office, the School of Jewellery and the museums etc. There are lots of activities where the schoolchildren will have an opportunity to participate in, and we hope that many of them will go on to attend the School of Jewellery and many become the future Designer Makers!