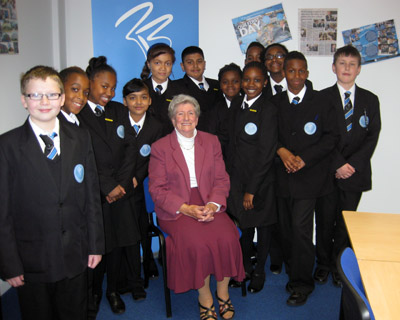 I was invited along to talk to one hundred 11 year-olds to tell them about the wonderful area they had just been transferred to. The children were split into two groups of 50 so I had to do it all twice but I thoroughly enjoyed every minute.

The children were beautifully behaved and quite delightful, especially when one of them said: “You have told us what it was like in The Jewellery Quarter and Great Barr the Second World War, but what was it like in the First World War?” Get out of that!

Lots more questions were fired at me but I escaped unscathed! After my talk, I was presented with an award – the Head Teacher’s ‘Special Award for Excellence (and a lollipop) and I was shown models of the canals, barges and locks which were great.

After I got back to the office I thought how nice it would be if they had proper display cabinets for their models and, as usual, Ken Schofield (on behalf of Jewellery Quarter Heritage) is sorting some cabinets out for them – at no charge! The children are very excited about refurbishing the Crimean Gardens in the spring but it is proving very difficult to find out why they were put on that particular site. Anyone who knows anything please do contact us.