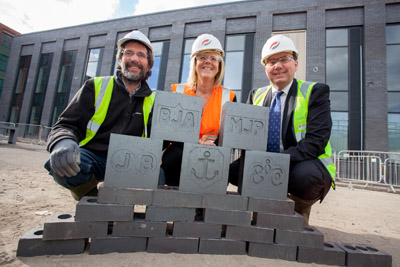 The structure of the new Assay Office Birmingham building has altered the skyline on Icknield Street, near Spring Hill and the blue brick exterior is almost complete.

The end of March 2015 saw the addition of some very special ‘feature bricks’ which bear the key hallmarking symbols used during the Assay Office’s 240 year history.

These include the traditional hallmarking symbols; a lion for Sterling Silver, crown for Gold, orb for Platinum and Pallas Athene for Palladium. The famous Birmingham town mark, the anchor also features prominently.

However, the story of Assay Office Birmingham is best told through its significant customers. The sponsor marks registered to the founder of the Assay Office and one of Birmingham’s leading entrepreneurs during the Industrial Revolution, Matthew Boulton, will take pride of place beside the front door.

Elkington & Co will also be represented as a reminder of one of Birmingham’s leading manufacturers whose products were recognised and admired all over the world and were assayed and hallmarked in Birmingham.

These are a representative sample of businesses who have a long standing association with Assay Office Birmingham and they are delighted to have their sponsor mark emblazoned on a brick for posterity.

Local Birmingham firms such as Toye, Kenning and Spencer and Thomas Fattorini are joined by national specialist jewellery retailer F Hinds and the British Jewellers’ Association amongst others. A fantastic £12,000 raised will be split between two charities; Birmingham Children’s Hospital and the Jewellery and Giftware Benevolent Society Fund.

Fund raiser David Doyle and Chairman of the Building Steering Group Martyn Pugh who is also an eminent Silversmith both sponsored bricks and had the privilege of laying then in place. Stella Layton, Chief Executive and Assay Master of Assay Office Birmingham was on site to ensure these first two symbolic bricks were laid in their allocated spaces, to begin to add some quirky, distinctive features to the new building.

Stella said. “We are very proud of our history and our long established place in the Birmingham business community. This new building represents a huge step forward and marks the confidence we have in our future. We are very pleased that some of our long standing customers will be so clearly represented on the exterior of our new building with the added bonus of raising money for two excellent charities.”

The new building is due to open during July 2015 following a phased move from the current Assay Office in Newhall Street to avoid any disruption in service.