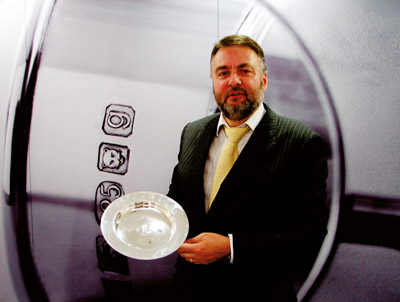 This prestigious award, more commonly termed ‘Valuer Of The Year’ was presented at this year’s National Association of Goldsmiths Institute of Registered Valuers’ Conference at Loughborough.

Five finalists were chosen from the Institute’s considerable membership for their exemplary standards of professionalism and integrity.

The awards actively encourage others to excel in appraisal and valuation skills and display conduct that enhances the reputation of the NAG’s Institute of Registered Valuers.

The Trophy honours the late David Wilkins, the former Chairman of the National Association of Goldsmith’s Valuations Committee.

David encouraged high standards of conduct and professionalism in jewellery valuation, and upon his death in 1994, his wife Margaret introduced the award as a legacy to a man who was respected industry-wide for his expertise and commitment. This years’ award, was kindly presented by Margaret Wilkins to Steven Jordan, the 15th recipient.

Steven Jordan has headed up Assay Office London’s valuation team, in conjunction with The Guild of Valuers and Jewellers, since April 2008 providing a fully comprehensive valuation service to both the trade and the consumer.

Steven is a Fellow of the National Association of Goldsmiths and a Fellow of the Institute of Registered Valuers and is a qualified gemmologist and diamond grader. He specialises in domiciliary and trade valuations on items of jewellery, silver and timepieces. He is an experienced valuer of London Livery company silver and Mayoral regalia.

He has more than 35 years jewellery related experience and has worked for Phillips Auctioneers in New Bond Street London, jewellers Mappin & Webb and Royal Warrant holders Carrington and Co.