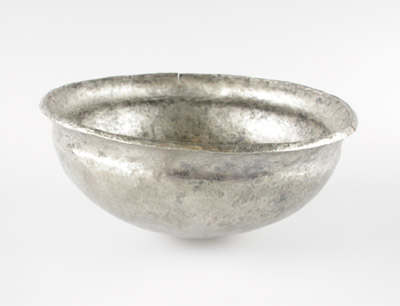 A beautiful 2,000 year old Iron Age silver bowl is the earliest known example to have been hand-made in Britain. It provides new evidence on the tradition of the ancient Celtic silversmith, a tradition previously unrecognised. (c) Leicestershire County Council.

A beautiful 2,000 year old Iron Age silver bowl, the earliest known silver bowl to have been hand-made in Britain, is the highlight of an enlightening, capsule exhibition, which is on view at Goldsmiths’ Hall during British Silver Week (May 9-13) and then until Saturday July 16.

The bowl, which fits in the palm of a hand (diameter c. 110mm, height c. 48mm) provides new evidence on the tradition of the ancient Iron Age silversmith in Britain, a tradition previously unrecognised.

In a week which celebrates the talents and skills of modern silversmiths working in 21st century Britain, the bowl emphasises how important the ancient craft of silvermithing was and still is today.

Contemporary silversmith, Alex Brogden who lives and works in Sheffield, investigated the evidence of the tools and techniques used by the ancient Briton to make the silver bowl. He said: ‘ Examining and handling this ancient silver bowl was a fascinating and exhilarating experience.

What made it so exciting was being able to literally feel and recognise the marks and techniques of the ancient silversmith and it was humbling to think that the fundamental skills of the silversmith have changed so little over the centuries.’

The bowl, together with Celtic and Roman coins and other extraordinary artefacts comes from the Hallaton Treasure, described by the British Museum as “a find of national significance”. The pieces have been loaned for the exhibition by Harborough Museum in Leicestershire and the unique bowl has never been on display in London before.

The bowl was found together with two ingots and Celtic coinage at an open air shrine at Hallaton in Leicestershire. The items are believed to have been buried during the last decade of the 1st century BC and the initial decades of the 1st century AD. The Corieltavi bowl is so called after the Iron Age tribe of the same name who inhabited what is now modern day Leicestershire, Nottinghamshire, Staffordshire and Lincolnshire. 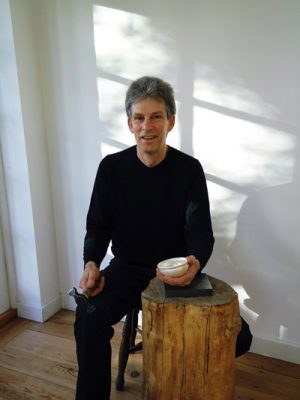 Sheffield based silversmith Alex Brogden in his workshop with the replica he made of the 2000 year old Corieltavi silver bowl.

The Hallaton site was discovered in 2000 by a local fieldwork group and over a period of the next four years subsequent excavations were undertaken by the University of Leicester Archaeological Services.

The discoveries, including more than 5,000 Celtic and Roman coins (a selection of which are included in the exhibition) all indicated that this site was a rare example of a purpose built open air shrine. This was the realm of the Druids, the priesthood of Celtic religion.

A disparate group of other artefacts, aside from the bowl, ingots and coins, such as items of jewellery and the remains of a wooden statue all prove that the Hallaton site had remained a special place for ritual activity for hundreds of years and that everything placed in the ground had been done so deliberately as an offering to the gods with no intention of recovery.

The open air shrine at Hallaton is therefore unparalleled on a national level in terms of artefact recovery and the preservation of their original context. As such the Corieltavi silver bowl is a thrilling and unique survival.

Over the past year, a team from the Goldsmiths’ Company, including the renowned contemporary silversmith Alex Brogden, who has produced commissions for No. 10 Downing Street and York Minster, worked with staff from Harborough Museum to establish the importance of the Corieltavi silver bowl. The startling conclusion was that this beautiful small bowl is the earliest known example of a previously unrecognised Iron Age silversmithing tradition in the Midlands.

The Goldsmiths’ Company established the metal content of the ancient bowl using cutting-edge ICP analysis techniques which revealed that it was composed of 84.03% silver which had been smelted with copper. The Goldsmiths’ Company then commissioned Alex to make a replica of the bowl which is also in the exhibition. Alex is convinced that the craftsman who made the bowl had sophisticated knowledge of silversmithing. It must have been a vernacular craft passed on from one generation to the next over several hundred years.

The bowl would appear to have been made from smelted silver, probably using old coins, the molten silver then poured into a depression to form a flat ingot from which a circle of the thickness and diameter of the edge of the finished bowl could be hammered.

In Alex’s opinion the much greater thickness of the edge of the bowl probably indicates that the silversmith had not hand-raised it from thinner sheet, but used the technique of ‘peening’. Starting with a circle of thick silver of the same diameter as the lip of the finished object, the centre is hammered thinner until the desired depth of bowl is achieved, whilst leaving the rim material the original thickness.

Inside marks provide evidence of the fact that something like metal dividers had been used to draw a circle onto the bowl near its completion, probably to gauge its regularity.

In addition he discovered evidence of the silversmith using other familiar hammer techniques still used today such as ‘caulking’ (extra thickening of the rim of the bowl by hammering directly onto its edge) and ‘planishing’ (smoothing the surface by hammering the curved body over a metal form). Each blow was applied with skill and control, the surface marks indicating the use of up to three different hammers, and this indisputably defines the craftsman as a silversmith.