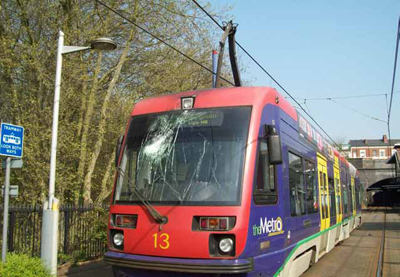 The RAIB is carrying out an investigation into an incident which occurred at about 13:22 hrs on 20 April 2011, when a tram, travelling towards Birmingham at about 70 km/h, struck a section of steel tubing (known as a cantilever tube) that had become partially detached from a post supporting overhead line equipment.

The events that ensued caused severe damage to the tram’s pantograph, the detachment, or partial detachment of a number of other cantilever tubes and the consequent loss of support for the contact wires over a distance of about 200 metres. The tram struck several of the detached cantilever tubes causing damage to the front and rear windscreens, side windows, and doors.

The tram came to a stand at Jewellery Quarter tram stop and all passengers and crew were able to exit onto the platform. It was then discovered that two adults and three children had suffered cuts due to broken glass. All required hospital treatment but were subsequently released following treatment.

Repairs were carried out and the tramway between Soho Benson Road and Birmingham was reopened to give a partial service on 24 April. Adjacent heavy rail lines owned by Network Rail were not significantly disrupted by the incident on the tramway.

RAIB’s preliminary examination suggests that a component of the overhead line equipment failed prior to the approach of the tram. This failure caused a cantilever tube to become foul of the tram and/or its pantograph. The investigation will seek to identify the reasons for the component failure and any underlying factors present.

Travel Midland Metro has been notified of the RAIB investigation. The RAIB’s investigation is independent of any investigations by the British Transport Police or the safety authority (the Office of Rail Regulation). The RAIB will publish a report, including any recommendations to improve safety, at the conclusion of its investigation.’

This report in available on the RAIB website. http://www.raib.gov.uk