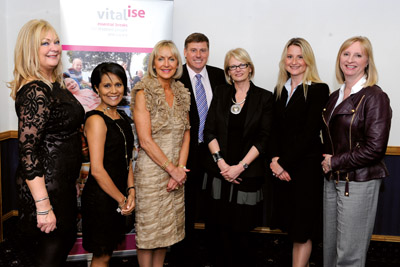 Leading Birmingham serviced and virtual office provider, The Corporate Pod who recently joined Jaguar, Barclays and Selfridges as main sponsor of the Vitalise Women of the Year 2009 Awards, is delighted to have helped the Charity raise an estimated £20,000 in direct proceeds from this year’s spectacular event.

Anne Corstorphine, Managing Director of The Corporate Pod comments: “For a charitable event to be attended by over 400 guests and raise £20,000 in such a difficult climate is an amazing achievement.

What sets this event apart is not just the opportunity for everyone to celebrate, relax and simply have some fun in aid of the hard work that Vitalise carry out but the immensely inspirational and sometimes humbling stories behind the achievements of these women.

Of particular note was humorous speech given by guest speaker, novelist Preethi Nair inspiring all to ‘never give up on your dream’ and the truly amazing story of Hilary Lister who became the first ever quadriplegic person to sail solo across the English Channel and in August this year she became the first disabled woman to sail solo around Great Britain – now that’s achievement!”

Hilary was presented with the Woman of Achievement award at the event. The Awards which honour Midlands-based women’s outstanding achievements and now in its 27th year, was hosted by Viscountess Cobham and presented by former ITV Central News anchor Arti Halai.

Asha Khemka OBE was presented with the coveted Vitalise Businesswoman of the Year 2009 Award. Asha is Principal and Chief Executive of West Nottinghamshire College. She has successfully led the College into the top five nationally with a grade one ranking from Ofsted. Asha is also the first female Principal of a UK College to be born and raised in India.

Commenting on the success of this year’s event, Amanda Godwin, Business Centre Manager of The Corporate Pod: “This is the fifth year that The Corporate Pod has supported the Awards but our first as a main sponsor and in my opinion it was the best one yet. Here in the Midlands we have a wealth of exceptional business women and as a company The Corporate Pod is passionate about supporting new entrepreneurs to get started, get that all important support and realise their dreams.”