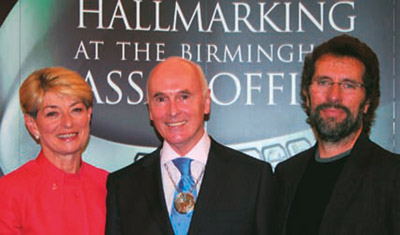 A stunning new ‘Badge of Office’ was presented to the Assay Master of The Birmingham Assay Office at their recent Annual General Meeting. Designed and made by Silversmith turned Palladium expert Martyn Pugh, the Badge is a significant piece.

Martyn felt the Badge should include appropriate symbolism. His design depicts the structure of the Palladium atom, vibrant coloured flames to represent the traditional cupellation method of fire assaying and a typical ‘read out’ from an X Ray fluorescence machine which uses the latest technology to assay pieces prior to hallmarking; and inevitably the most prominent symbol is the Anchor, the town mark of the Birmingham Assay Office hallmark since it was founded in 1773. 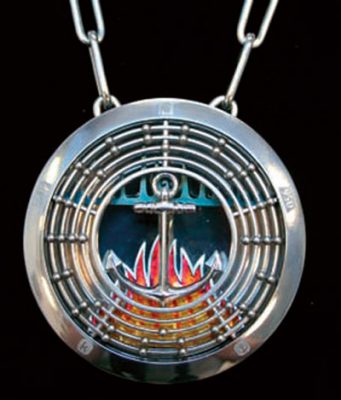 The badge was constructed in the classic tradition of the Birmingham Jewellery Quarter with highly skilled specialists all making their own contribution. Martyn deliberately deployed a range of techniques from traditional, to modern, to experimental.

Cooksons Precious Metals, in the heart of the Quarter, supplied Palladium and casters Jewelcast provided components for the spectacular badge and its chain.

Palladium is a new metal to the jewellery industry and the project involved a degree of experimentation and ground breaking work as the makers were not sure how the ‘new’ metal would respond to techniques which are established and successful for other metals.

Chief Executive and Assay Master of The Birmingham Assay Office, Michael Allchin, is impressed with the new regalia. “Martyn has successfully delivered what the Wardens commissioned,” says Michael. “This piece references our traditions and our past but focuses on innovation, which has always been the key to our future.

We are extremely grateful to all those who have contributed to this project. I am very proud to wear this Badge of Office which celebrates the continuing design and manufacturing skills of the Birmingham Jewellery industry as well as marking a significant point in the long history of The Birmingham Assay Office.”