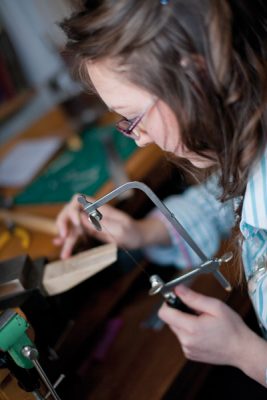 This April Jeweller Elizabeth Humble (22) from Dundee is to launch her exciting new collection of jewellery on www.astleyclarke.com. The range of jewellery is the result of a six-month long mentoring programme administered by the Goldsmiths’ Company together with the award winning and highly esteemed online designer jeweller Astley Clarke.

The programme was part of the Goldsmiths’ Company’s Jewellery Award which was won by Elizabeth at New Designers’ in June 2010.

In addition to being presented with a precious metal bursary to the value of £500 and a cheque of £1,000, Elizabeth was given the opportunity to work with Astley Clarkes’s experienced design team, headed by Creative Director Lorna Watson, to develop an exclusive range of jewellery.

Not only was she supported in the design process, she also received guidance in other areas such as pricing, PR, technical advice, marketing, photography and branding from both Astley Clarke and the Goldsmiths’ Company.

Elizabeth’s jewellery collection is in production and will be on line at www.astleyclarke.com in April 2011. The collection, made of sterling silver and vermeil incorporating small faceted stones of Botswana agate and labradorite, comprises a long necklace, a pendant, a bracelet and two associated rings together with three pairs of earrings. The pieces range in price from £120 for silver earstuds to £595 for a long necklace set with labradorite.

Karin Paynter from the Goldsmiths’ Company who has overseen the whole project since its inception said: “We are delighted that this mentoring programme has proved such a success.

It has been an educational and valuable experience for Elizabeth. Elizabeth has a very thorough, mature approach to her work and her jewellery is supported by beautiful drawings underpinned by a very comprehensive understanding of manufacture. The next mile-stone is when Elizabeth’s jewellery goes live on the site and how it is received by the consumer.”

The mentoring programme began in July 2010, shortly after New Designers when Elizabeth met with Lorna Watson and Astley Clarke’s merchandising and marketing team. They discussed how her jewellery would translate to a more commercial level and then Elizabeth returned to Perth to work on the proposed range.

Over the ensuing months the design process and casts were constantly evaluated and refined. Lorna gave Elizabeth vital feed-back, encouragement and support, as well as very useful constructive criticism. “That was hard to take at first” said Elizabeth, “but it proved extremely beneficial and helped me to step back and reassess my designs. It was important for me that while refining my pieces I still maintained my signature style and I am very pleased that with Lorna’s guidance I didn’t lose my originality or creativity in the journey towards saleability.”

Elizabeth’s jewellery takes its inspiration from the atmospheric weather beaten landscape around her home on the West coast of Scotland. This is translated in silver and gold into a sophisticated range of highly original and wearable necklaces, rings and brooches. Lorna Watson said: “We are thrilled with the collection of jewellery that Elizabeth has created for us.

Her jewellery demonstrates a refreshing combination of exploration and refinement in materials and technique – she has a definite point of difference which sits nicely with Astley Clarke’s belief in “design narrative” and a strong attention to detail. It has been an enjoyable experience for all concerned and Elizabeth has been utterly professional throughout and shows tremendous potential for further development.”

The brand focuses on three core tenets: design, craftsmanship and provenance and prides itself on an unrivalled customer service that includes Personal Shopping & Concierge services. This young, luxury brand is growing quickly – a new, yet highly experienced in-house team in design, ecommerce, marketing, PR and logistics has helped to solidify expansion plans with further developments planned.