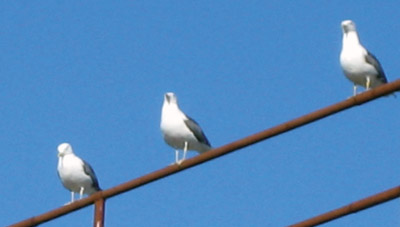 Most will remember the problem of the gulls in The Jewellery Quarter which was widely covered by the media ten years ago which saw Marie Haddleton chasing the gulls across the rooftops wielding a small plastic owl, pointing it in their direction! (The owl is supposedly the natural predator of a gull!)

Can’t really say that the gulls were particularly scared of the plastic owl which was only half their size – reckon they were more scared of Marie’s fierce expression!

This year the gulls are back with a vengeance. Fortunately they are only a real nuisance when the baby seagulls first leave the nest and are slithering and sliding around on the roof tops whilst learning to take-off and land safely – their cries bring protective adult gulls in from miles around and they sometimes dive-bomb anyone in bright clothing.

At the moment men are working on the roof extension at the back of JW Evans in Albion Street (gulls used to build nests on that roof) and the gulls regard the men in their bright yellow jackets and hats as a menace to the fledglings. (The men have even hung up a jacket with flapping arms as a decoy!)

Businesses have had to put up with bird-mess on the cars and pavements for the past ten years but now the residents are being awakened by the raucous calls of the gulls at dawn – oh well, the joys of City Centre Living!

Does anyone have an idea of how we can escalate this as a complaint with the council? They are literally ruining my life at the moment. The amount of noise they are making is an absolute nuisance. I have to go to sleep wearing my ipod at present because they make so much noise every hour or so all throughout the night. I literally HATE seagulls at the moment!!!!