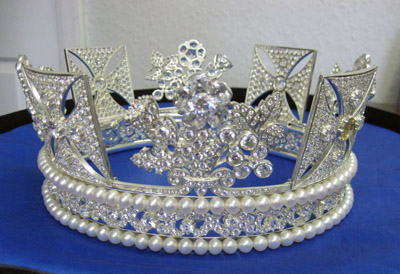 This beautiful replica of the King George IV Diadem has been made by Richard Witer. Richard started his career as an apprentice at H. Samuel in 1960 and progressed through the trade, working for various well known manufacturers, making mostly hand-made pieces, before in more recent years teaching at The School of Jewellery on their Short Courses, etc.

Richard has now retired (if a jeweller ever really retires!) and now has more time on his hands.

As a younger man he always made his colleagues laugh by vowing that ‘one day I will make the crown jewels!’

With his retirement Richard found time to realise his dream and he decided to create a replica of the King George IV State Diadem.

The original was made by Rundell, Bridge & Rundell in 1820 and has frequently appeared on postage stamps and coins; this crown incorporates the national emblems of England, Scotland, and Ireland, and is probably the most familiar piece of The Queen’s jewellery.

The crown is set with 1,333 diamonds, including a four-carat pale yellow brilliant in the centre of the front cross. Her Majesty The Queen wears the Diadem when travelling to and from the State Opening of Parliament.

The Queen’s Diamond Jubilee year finishes on 2nd June 2013, when the accent will then be on the Jubilee of the Coronation of the Queen. The idea behind Richard’s ambitious project was to make a replica of one of the pieces, and he chose the Diadem. No, he didn’t use real diamonds, just cz’s. The replica is hallmarked silver.

Richard’s ambition is that this crown be displayed at special events in Art Galleries etc and may eventually find a permanent home somewhere connected with Royalty, and where everyone can look and wonder at this magnificent piece of work, which he tells us took him over 440 man-hours to create.

This replica is absolutely fantastic, it is spot on !

I am a young Queen Victoria historical interpreter and would love to get in contact with Richard about this crown. Could you please forward my email to him 🙂