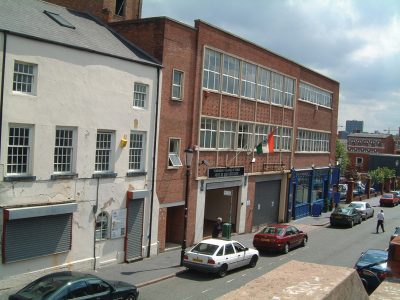 With ongoing investigations no photos from the demonstation, but here’s a blast from the past of theI ndian Consulate with flag flying in 2003. © The Hockley Flyer.

A car rally took place on 12 December when over 1,000 demonstrators in vehicles and on foot (mostly not wearing masks) besieged the Indian Consulate (which was closed anyway) and blocked off nearby roads and pavements in the Jewellery Quarter, to lodge a protest against something happening in India, causing massive disruption to workers, retailers, visitors, etc and costing the trade an estimated £50,000.00 as it was an important pre-Christmas shopping day.
Although the police had prior notice of this event, there was no attempt to divert vehicles away from the Jewellery Quarter when they congregated on one side of Great Hampton Street, stopping all traffic, which would have prevented this incident.
Just a small group could have been allowed to visit the Consulate and put the protest document through the letterbox.

This is the Official Statement issued by the police:

POLICE STATEMENT
Indian Consulate Demonstration on 12th December 2020.
Large demonstrations regarding agricultural reforms in India took place in Birmingham and Sandwell on 12 December 2020 causing traffic disruption in Birmingham, West Bromwich, the Jewellery Quarter, and surrounding roads.
While we were aware that the rally was due to happen and had a dynamic policing plan in place, there was no identified organiser and the lack of established route led to additional disruption and delays for other road users – including emergency vehicles.
Due to the volume of people and vehicles in attendance our priority was to ensure that public safety was maintained.
Officers on the ground prosecuted a number of drivers for road traffic offences including careless driving and issued directions to leave to more than 1000 people. Three people have been issued with a £100 fixed penalty notice after refusing to comply with regulations following a direction to leave.
Deliberately not following the regulations and measures put in place to limit the spread of the virus is unacceptable and our officers will continue to take the appropriate action where necessary.
Superintendent Sarah Burton who led the police response to the rally said: “While we absolutely respect and support the right to demonstrate, there are requirements that need to be met by law.
An organiser needs to be identified and the police should be notified in advance. It is very unfortunate that did not happen today, and we will be taking steps to identify the people responsible.
“Unfortunately, some smoke flares were thrown from moving vehicles, putting other road users in danger and as part of the post incident review CCTV, drone, body worn video, and camera footage will be reviewed to identify any offences, and those involved will be prosecuted retrospectively.”
Although Birmingham and Sandwell (at that time) are no longer in lockdown, both areas remain on extremely high alert in tier three, and strict regulations introduced by the Government remain in place to help prevent the spread of Coronavirus.
People are reminded that the current situation means that these types of gatherings pose a risk to public health.
Personal choices matter and we simply ask people to act responsibly, and to work with us wherever possible, in order to protect others from harm.