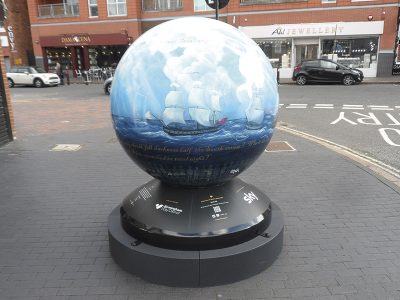 The World Reimagined has trails of over 100 large globe structures in seven cities across the UK from 13 August – 31 October 2022. The sculptures are created by artists to bring to life the reality and impact of the Transatlantic Trade in Enslaved Africans. Here we bring highlights about the three in the Jewellery Quarter, part of the Birmingham Trail.

Voyage of the Guineamen
Donna Newman – Journey Of Discovery Theme
Donna’s design responds to the theme ‘The Reality of Being Enslaved’, which makes real the experience of those people who were enslaved, from their capture, captivity and voyage to lives and deaths enslaved in different contexts, places and generations.

Artist’s statement
This design responds to the theme The Reality of Being Enslaved and in particular the story of Voyage. Whilst researching my design, I came upon the poem Slavery written by Hannah More, one of the most prominent female writers championing the abolitionist cause in eighteenth century Britain. I was particularly drawn to the lines of the poem which referred to light and darkness.
I was reminded of the slave ships, or ‘Guineamen’ as they were known, and the horrific realities of the tortured human cargo crammed into their dark hulls. My design references the great maritime art of the eighteenth century and presents a subverted view of the golden age of sail. The glorious ships with their billowing white sails bathed in sunlight stand in stark contrast to what lies beneath.

About the artist
Donna Newman is the Artist behind Eden-Designs Murals. A freelance artist based in the Midlands, she has been working as a professional muralist and painter for over 15 years. 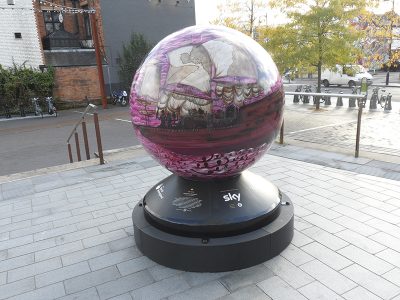 The Love From Africa
Kassessa Gandara – Journey Of Discovery Theme
Kassessa’s design responds to the theme ‘Stolen Legacy: The Rebirth of a Nation’, which brings to life how Britain was transformed and enriched as a result of the Transatlantic Trade in Enslaved Africans and the free labour of the enslaved. It explores the legacy of the Transatlantic Trade in Enslaved Africans in building the financial and trading power of Britain; strengthening the Church and the might of universities; and establishing dynastic influence and power.

Artist’s statement
My globe concept is based on the legacy stolen from African people. With my work I suggest that we still feel the scars from the inhumane treatment of humans during this time which I believe has led to a loss of self-love for Africans.
In this painting I feature boats that crossed the Atlantic and I show people in the water, thrown overboard. I want to draw attention to the loss of life and the insurance policies that were used to protect the slave owners and transporters, not the enslaved people. Despite the fact that the enslaved people were humans, and therefore priceless, they were treated as cargo.

About the artist
Kassessa is a visual self-taught artist from Angola. From an early age, he was interested in art and developed a great passion for creating plays, toys and art crafts.
🌐 http://www.eden-designs.co.uk 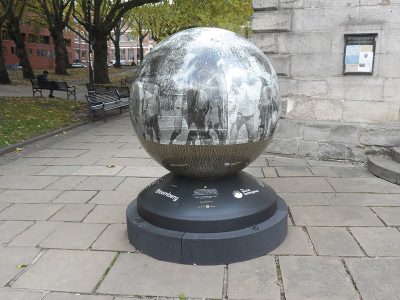 Abstraction Be Damned
Tamika Galanis – Journey Of Discovery Theme
Tamika’s design responds to the theme ‘Abolition & Emancipation’, which shares the story of the campaign for abolition, its key events, heroes and allies. It also lays bare the full, messy motivations and process of abolition, which were not as pure as often represented.

Artist’s statement
The Transatlantic Trade in Enslaved Africans is an abstract concept for most of the world. Macro concepts such as “Africa” and “the West” are frequently used loosely in conversation.
The British, having established a system for slaver compensation prior to emancipation, kept painstakingly detailed records of the enslaved who were displaced to their colonial dependencies. For those of us in post-colonial Caribbean countries, the registers of the enslaved make the experience much more micro; individual details of the enslaved in our respective countries is quantifiable, even if only for a short space of time.

About the artist
Tamika is a documentarian and multimedia visual artist. A Bahamian native, Tamika’s work examines the complexities of living in a place shrouded in tourism’s ideal during the age of climate concerns.
🌐 https://www.tamikagalanis.com