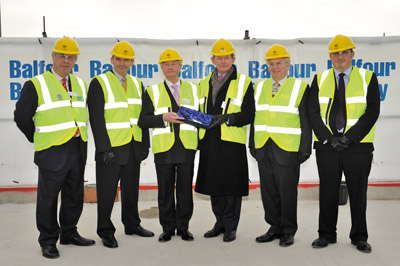 The Prime Warden described the occasion as: “an event of major importance for the Company and the Board of Trustees of the Centre as it represents a significant point in the journey towards the realisation of this ground-breaking initiative.”

With a total capital investment of circa £17.5 million, this major project is a demonstrable example of how an ancient livery company, in partnership with the public sector (the London Development Agency provided the land for the development), is taking a fundamental interest in not only preserving the past but also investing in the future.

When finished the Centre will comprise a multi faceted amenity and will be home to a new training and education facility to be known as the ‘Goldsmiths’ Institute’: this will offer a range of education and training opportunities including a pre-apprentice course for young people who are interested in pursuing a career as a goldsmith, a post-graduate Professional Design Programme concentrating on developing creative design-led goldsmithing businesses, in addition to other specialist training opportunities for the wider industry.

The Centre will also provide workshops, studios, conference, seminar and exhibition space and a café. A regular programme of related specialist exhibitions and events, which will be open to the general public, will be run throughout the year.

The purpose built facility incorporates an existing Victorian grade II listed structure, one of the first London Board Schools built in 1872. Architect John Lyall was challenged to successfully and sympathetically combine a restoration project with a new build of a five storey adjoining block.

The new building has been designed as a contemporary addition that contrasts the existing listed school building. Clad in stone and patinated brass, with windows that punch out of the façade, it is joined to the restored school via a glazed atrium. Contractors Balfour Beatty Construction Scottish & Southern Ltd have been responsible for the building work and have been on site since early summer 2010.

Deeply rooted in tradition and history, ‘topping out’ is an important event in the construction industry as it celebrates a key moment in the physical progress of a building, in this case it is the fact that the concrete core, with all five floors of the new Centre, are in place.

In front of an assembled party Bob Clark, Balfour Beatty Construction Scottish & Southern Ltd’s Managing Director outlined the progress made by his team and said: “Balfour Beatty is delighted to be celebrating this important milestone with our client the Goldsmiths’ Centre, the design team, subcontractors and suppliers, and we are all committed to handing over this high-quality scheme this autumn.”

The Prime Warden responded by thanking both the Balfour Beatty workforce and the architect John Lyall for all their efforts in taking the Goldsmiths’ Centre from a vision to a reality. He was then asked to fulfil a symbolic act of ceremony by smoothing out the last bit of concrete on the external structure of the building, after which he was presented with an engraved trowel to commemorate the event.

The Goldsmiths’ Centre is scheduled to open in the autumn of 2011 with its purpose built workshops and studios. There will also be state-of-the-art teaching and learning spaces for those attending the courses on offer from October 2011.

Additionally there will be a fine mounting workshop, a silversmithing workshop and tool room areas, all housed on the ground floor of the Institute. With a prototype workshop and technology area on the first floor, the impressive facilities will be available not only to the Institute’s trainees but also to the Centre’s workshop occupants and others from the wider craft and industry.

The Goldsmiths’ Company has more than 700 years of experience of providing vocational training and is responding to the current situation by supplying the Centre which has been specifically designed to provide a unique range of high quality and relevant education and training opportunities to meet the needs of aspiring young craftsmen in the 21st century.”