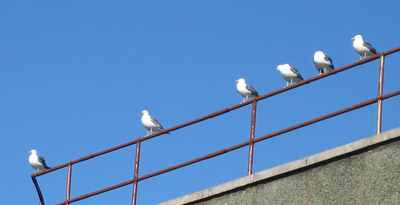 Most of you will remember the massive publicity we had about ten years ago when residents started to move into the Quarter and consequently suffering the noise of the gulls who were keeping them awake.

Marie Haddleton ended up posing for pictures of her chasing the gulls across the rooftops with a small plastic owl (a natural predator of the gull???).

The story and pictures made the general media and television, but didn’t affect the gulls in any way!

Now, it’s Spring and the gulls are back, keeping the residents awake but, what is worse, dropping their ‘messages’ over cars and pavements.

The Pest Controller at the Council says they have considered shooting, drugging, using distress sounds, birds of prey, scarecrows, removing nests and even lasers to deter the gulls; but after rejecting all these methods, they will replace the eggs with artificial ones to fool the birds to remain in their nests and out of harm’s way.

A six months trial starts soon in The Jewellery Quarter.