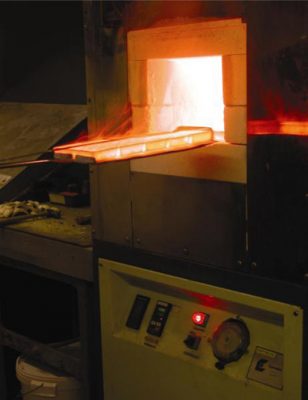 The CIBJO Precious Metals Commission was established at the 80th CIBJO Congress in Vancouver, Canada in July 2006. The Commission started work immediately thereafter and came up with a number of proposals to be discussed at the 81st Congress in Cape Town in March 2007.

The Commission’s principal proposal was to publish a new Precious Metals Blue Book to stand alongside the existing family of product Blue Books: The Diamond Blue Book, The Coloured Stone Blue Book, and The Pearl Blue Book.

The CIBJO Congress at Cape Town endorsed this idea and asked the Commission to work on the project, with the aim of bringing a final draft of the new Blue Book to the CIBJO Congress in Dubai in April 2008 for discussion and debate.

The Cape Town Congress stipulated that The CIBJO Precious Metals Blue Book should reflect the highest standards and practices of the international precious metals industry, although in cases of contradiction it would always be superseded by national laws.

Cupels containing gold samples are taken out of an 1100°C furnace as part of the fire assay technique, also called cupellation.

As Vice President of the Precious Metals Commission, I asked delegates at the Cape Town Congress to volunteer for a Working Group to come up with ideas for the new Precious Metals Blue Book. A truly international team came to the aid of the Commission.

In May 2007 I circulated an initial draft proposal for the new Blue Book to the other members of the Working Group. The group responded with various suggested additions and deletions.

Because CIBJO is the worldwide umbrella group for the jewellery industry, there was a good deal of debate over the question of whether the Blue Book should include standards for non-jewellery items made with precious metals—e.g., watches, gift items such as pens, silver flatware (cutlery) and hollow-ware (bowls, cups, etc.). In the end, the Commission agreed that the Blue Book should not include standards for the watch and gift industries, but should include standards for silverware because it is such an integral part of the precious metal industry and so closely related to jewellery.

Having taken into account the comments I received from all the respondents, I sent out the second draft of the Blue Book in August 2007. Once more there were many positive replies, especially regarding the proposal to produce a new version in ISO format once further changes had been made. Accordingly, a third draft of The Precious Metals Blue Book was produced in ISO format and circulated to the Working Group in late October 2007.

This raised a number of issues not previously discussed. Precious Metals are unlike diamonds, coloured stones and pearls, in that nearly every country in the world has some kind of national law relating to them.

The national laws determine things such as finenesses, tolerances, solders and marking requirements. But all national laws are different. The objective of the Precious Metals Blue Book is to set a CIBJO standard for the jewellery industry which has international respect and which everybody should be trying to achieve, even though it might sit outside of the national law.

The debate within the Working Group has now heated up and sparked new enthusiasm, and a good response has already been received by the vice president. Many new ideas have been brought up that the team will have to think about over the next few months.

The immediate aim of the Commission is to complete a final draft of the new Precious Metals Blue Book early in 2008, so that there is plenty of time to circulate it to all CIBJO delegates before the congress in Dubai in April. I am pleased with the progress we are making and the commitment shown by everyone, bearing in mind that we all have full-time jobs running our own businesses, and I am confident that we will have a well thought out document to discuss next year. Thanks are due to everyone involved for their time, commitment and encouragement in bringing the new Blue Book forward.

Michael Allchin is the Chief Executive and Assay Master of The Birmingham Assay Office in the UK, which is an associate CIBJO member.