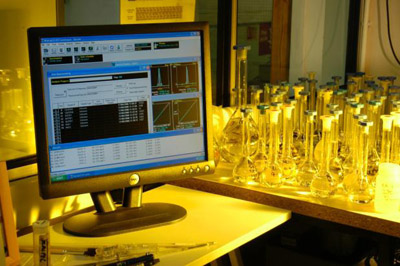 A shot of an ICP-OES screen.

ICP-OES stands for Inductively Coupled Plasma Optical Emission Spectrometry. This piece of equipment is used for the multi analysis of different elements in metals, and is particularly useful for measuring the fineness of platinum in platinum alloys.

Cupellation (fire assay) is best for gold alloys but not for platinum. The most widely used fineness for platinum jewellery worldwide is 950 parts per thousand.

In order to establish that platinum jewellery is of the required fineness, The Birmingham Assay Office uses a process involving the ICP-OES, which requires the sample to be in solution.

A small sample of platinum is removed for analysis, accurately weighed and transferred to a flask.

The sample is then dissolved in an appropriate acid matrix. This solution is diluted and passed through the plasma of the ICP spectrometer, which is produced from argon gas.

The plasma reaches temperatures of up to 10,000°C, which is sufficient to transform the elements present into a gas, so that the atoms and ions enter into an excited state in which they release energy and emit radiation at a characteristic wavelength for each element.

This radiation is analysed by the spectrometer, and from the intensity, the platinum content of the solution is calculated. From this measurement, the amount of platinum in parts per thousand can be calculated, giving the fineness of the original article, which is then punched or lasered onto the jewellery as part of the Hallmark.